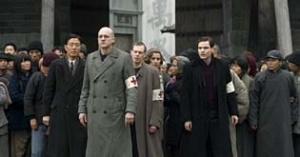 Nanking in 1937. Hamburg businessman John Rabe has lived with his wife Dora in the former Chinese capital for almost thirty years. He is head of the local branch of Siemens and is now due to return to Berlin. The manager is reluctant to leave because he has developed a real bond to the country and its people. But, during his farewell party, Nanking is bombed by the Japanese, who have recently taken Shanghai. The whole town is in panic and Rabe opens the doors of the company′s compound in order to provide refuge for his workers and their families desperate to escape the raid. While the fires are extinguished and the damage is inspected the next morning, the city′s remaining foreigners come together to discuss what can be done in the face of the Japanese aggression. German-Jewish diplomat Dr Rosen suggests that a security zone be set up for Chinese civilians. John Rabe is appointed chairperson of Nanking′s security zone because, as ′axis powers′, Germany and Japan have agreed to assist each other during the war.

The only voice of dissent is Dr Wilson, chief physician of the local hospital, who harbours nothing but animosity for Rabe, the ′Nazi′. The imperial Japanese army cracks down on the Chinese civilians population with astonishing brutality. However, Rabe and his comrades-in-arms succeed in wresting the planned security zone from the Japanese. Hundreds of thousands of people flee into the zone – many more than are expected. Finally, the Japanese make use of a pretext in order to attack the zone – for Rabe a race against time begins…