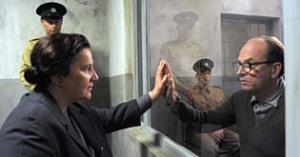 After the end of World War II, Adolf Eichmann, one of the most notorious war criminals of the Third Reich, flees to Argentina. With his wife and three sons, he lives undetected in the German community of Buenos Aires - a community that, in a cruel irony of fate, consists mainly of old Nazis and Jews. While Eichmann meets journalist and former SS officer Willem Sassen, who first learns of the deportation and murder of Jews through interviews with the unrepentant Nazi criminal, Eichmann's son Nick falls in love with the daughter of a concentration camp survivor. When the latter begins to suspect who the father of his daughter's boyfriend is, he notifies German Attorney General Fritz Bauer. Bauer does not trust that the German justice system will really catch Adolf Eichmann and passes the information on to the Israeli government.