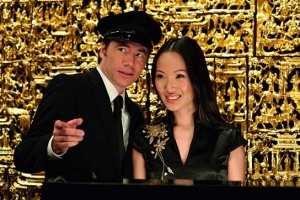 Max Zettl works as a chauffeur for Swiss magnate Urs Doucier, who wants to establish a new magazine for Berlin's "cultural elite". But despite the official claim, the planned publication rather resembles a racy online tabloid. The cunning Zettl tricks himself into the position of editor-at large, and in order to earn his merits, he looks for a sensational scoop to launch his magazine. He is assisted by his beautiful friend Verena, who used to have an affair with the German chancellor and thus has close ties with the establishment, and legendary Munich paparazzo Herbie Fried. Eventually, the trio stumbles across several scandals: The female mayor of Berlin is biologically a man and the chancellor isn't really on trip to Italy but lies dead in the morgue of a private clinic.