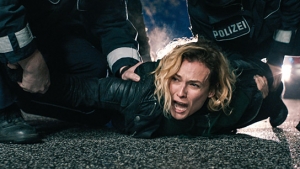 Katja's life in Hamburg is completely derailed when her husband Nuri and their son Rocco are killed in a terrorist bombing. She hits rock bottom, starts taking drugs and contemplates suicide. Eventually, the police identify and arrest the perpetrators: André und Edda, a neo-Nazi couple. It was André's own father, who led the police on the right track. Yet Katja's hope that the murderers receive their sentence in court is shattered. Following a harrowing trial, in which Nuri's best friend Danilo serves as Katja's lawyer, Edda und André are acquitted for want of evidence. Katja is devastated, but soon her desperation gives way to an urge for vigilante justice.