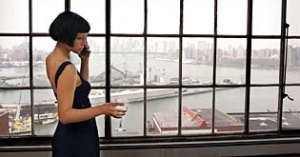 Ratz wants to kill his father – at least virtually. To this end he invents a computer game in which he can do battle with his father and, level by level, can injure and kill him as often as he wants. Otherwise, 35-year-old Ratz doesn′t get up to much. He is engaged in a silent struggle with the rest of the world: he struggles because he is the son of a Minister, because he loves his sister the way you aren′t supposed to love a sister, and because he doesn′t seem to be able to come to grips with the world at all.

And then he receives a phone call. At the other end of the line he hears a voice from the past – Mimi. She wants her childhood friend to come to New York. She needs his help, she says. Ratz has always been willing to help Mimi with many things, and besides, there′s not much to keep him in Vienna these days. And so he sets off on a journey that takes him way back into history and into the world of his forefathers. Once in New York, Ratz is faced with a number of disturbing questions: who is the old man in the cellar, how much of Mimi′s feelings are pretence, and what kind of virtual murders are permissible to make a quick buck? Ratz finds himself drawn into the history of a Jewish family that was massacred by the Nazis in Lithuania. He also becomes involved in the story of the family of one of the perpetrators of this horrific crime now living in exile in America and still harbouring a dreadful secret. In addition, he is obliged to witness the gradual disintegration of his own family.