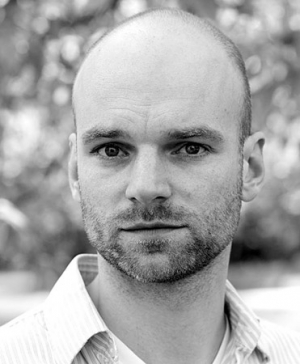 Thomas Stuber was born in Leipzig on 31st of March 1981. He first came in touch with the film business as an intern and was then in charge of Script and Continuity in productions like "Antikörper" ("Antibodies", 2005, Director: Christian Alvart), "FC Venus" (2006, Director: Ute Wieland) and "Ein fliehendes Pferd" ("Runaway Horse", 2006, Director: Rainer Kaufmann). In 2004, he began to study Directing at the Filmakademie Baden-Württemberg.

In 2006, Stuber directed the short film "Es geht uns gut". Two years later his 60 minutes long film "Teenage Angst" celebrated its premiere at the Berlinale. The film about four students at an elite boarding school, who are looking for the extreme by engaging in games that become more and more violent, won several prizes.

Stuber’s graduation film, "Von Hunden und Pferden" ("Of Dogs and Horses", 2011) was shot in black and white and became a big success as well: Stuber was nominated for the First Steps Award, won the Deutscher Kurzfilmpreis as well as the silver medal at the Student Academy Awards® in the Foreign Film category. After his graduation, he directed three episodes of the German TV crime series "Großstadtrevier" (2014).

Together with author Clemens Meyer, Thomas Stuber then wrote the screenplay for his second feature film "Herbert" (2015). The film tells the story of an aging and worn-out ex-boxer, who tries to come clean with his past after a blow of fate. "Herbert" premiered at the International film festival in Toronto. At the Deutscher Filmpreis 2016, "Herbert" won the Silver prize for Best feature film; Peter Kurth was awarded the prize for Best actor and Hanna Hackbeil won for Best Make-up.

In 2015, Stuber had directed "Verbrannt", an episode of the German TV crime series "Tatort", about asylum seeker Oury Jalloh who died under mysterious circumstances in police custody in Dessau. Based on true events, the episode received a lot of attention and praise. It won the main prize at the Deutsches Fernsehkrimi-Festival in 2016. The TV crime story "Ein Mann unter Verdacht" (2016) about a man who becomes a murder suspect after his wife disappears obtained critical acclaim as well.

Stuber’s next feature film "In den Gängen" (2018) is based on a screenplay for which he had won the Deutscher Drehbuchpreis together with Clemens Meyer already in 2015. The film premiered in the Berlinale competition in February 2018. Also at the Berlinale, Stuber was awarded with the Gilde Filmpreis and the prize of the Ecumenical Jury. At the Deutscher Filmpreis "In den Gängen" received four nominations, one of them in the Best Picture category. The film was released in German cinemas in May 2018.

Stuber then made two television films: "Kruso" (2018), a film adaptation of Lutz Seiler's book of the same name from 2014, about a drop-out colony on Hiddensee shortly before the fall of the Berlin Wall; and for the popular and long-running "Tatort" series he directed the episode "Angriff auf Wache 08" (2019) with Ulrich Tukur, a variation of John Carpenter's classic "Assault on Precinct 13" (US 1976).

For the streaming service Sky, Stuber directed the mystery horror series "Hausen" (2020), about a janitor (Charly Hübner) who moves into a demon-infested prefabricated building with his son (Tristan Göbel).