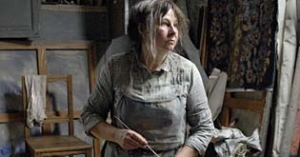 "Séraphine" is a filmic portrait of the artist Séraphine Louis, one of the most important representatives of "Naïve Art". France, in 1912: The well-known German art collector Wilhelm Ude moves from Paris to the small town of Senlis to dedicate himself to writing far away from the hustle and bustle of the big city. He employs a housekeeper called Séraphine who at first seems fairly plain but turns out to be quite resolute and cross-grained. One day, Ude who is considered to have discovered the artists Picasso and Rousseau finds a small painting on wood. Impressed by the unconventional style of the piece of art, Ude is all the more surprised when Séraphine of all people turns out to be the paintress. Ude decides to promote her ambitions – and thus helps to launch an important artistic career.