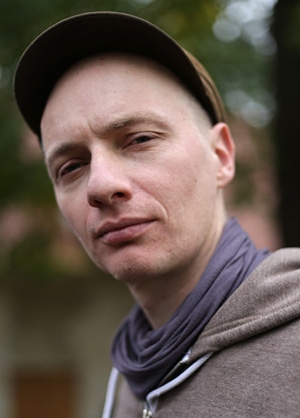 Dietrich Brüggemann was born in Munich on 23.2.1976 and is the brother of actress Anna Brüggemann. After growing up in Germany and South Africa, he worked in the film industry in various capacities from 1997-2000 and subsequently enrolled in the directing class at the College of Film and Television at Potsdam-Babelsberg. In 2003 one of his first short films "Warum läuft Herr K. Amok?" was shown at the Berlinale. Brüggemann also works as an assistant director and director of a number of music videos, which he manages to realize besides his studies; he is also known as a regular contributor to the German film magazine, "Der Schnitt". "Neun Szenen", being his feature film debut, screened 2006 at the Berlinale in the Perspektive Deutsches Kino section.

In 2010, Dietrich Brüggemann presented his second feature, and again in the Perspektive Deutsches Kino section: the drama "Renn, wenn Du kannst", starring his sister Anna Brüggemann, who also co-wrote the script with him.

Brüggemann next completed the short "One Shot" (2011) and appeared in a supporting role in the youth drama "Little Thirteen" (2012). Brüggemann's third feature film, the comedy "3 Zimmer/Küche/Bad", was released in 2012 and tells the story of a group of students who share a flat in Berlin and have to struggle with the demands of everyday life and romance.

Brüggemann then directed the drama "Kreuzweg" which depicts the ordeal of a 14-year-old girl who suffers from her rigid, ultra-religious upbringing. Brüggemann wrote the story together with his sister Anna Brüggemann, and the film premiered in the competition of the 2014 Berlin IFF, eventually winning the Silver Bear for Best Screenplay and the Award of the Ecumenical Jury, followed by more accolades at international festivals. The film was released theatrically in March 2014.

After tackling religion and faith, Brüggemann took on politics and demagogy in his next feature: "Heil" is a crass satire, in which an Afro-German writer suffering from amnesia becomes a propaganda tool for Neo-Nazis. The film premiered at the 2015 Munich film Festival and was released in July 2015.

Afterwards, he again worked as a director and screenwriter. Between 2016 and 2020, he made three films in the "Tatort" series: the crime thrillers "Stau" (2017) and "Das ist unser Haus" (2020), both set in Stuttgart, with Richy Müller and Felix Klare as the investigator duo, as well as "Murot und das Murmeltier" (2018) with Ulrich Tukur as the chief detective. In the latter two, his sister Anna is also part of the cast.

In between, filming for "Nö" began in 2018. The feature film with surreal elements about the love and states of mind of a young couple, was again penned jointly by the Brüggemann siblings, and starred Anna Brüggemann in the lead role. The film is scheduled for theatrical release in 2021.