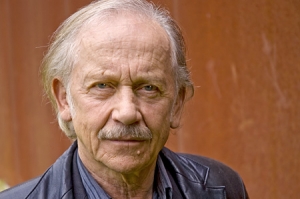 Tilo Prückner was born in Augsburg on October 26, 1940 and went to high school in Nuremberg where he first started acting. After graduating, he went to Erlangen to pursue a degree in law, yet dropped out of university after deciding that he wanted to become a professional actor. He then took acting classes with Hans Josef Becher and Ellen Mahlke in Munich.

Prückner's first professional appearance on a stage was at Munich's Theater der Jugend in 1962 where he performed in Shakespeare's "A Midsummer Night's Dream". His engagement lasted for two years, then he moved on to other theaters in Germany and Switzerland. 1967 marks the year he first featured on the big screen in Franz-Josef Spieker's rampant satire "Wilder Reiter GmbH" ("Wild Rider Ltd."), one of the first contributions to the New German Cinema.

Having worked together with Peter Stein in Zurich in the late 1960s, Tilo Prückner followed the director to Berlin in the early 70s, where he became one of the founding members of the most renowned political theater of its time, the Schaubühne am Halleschen Ufer. He stayed at the Schaubühne until 1973, then became a free agent actor and also tried his luck as a playwright, publishing "Gilgamesch und Engidu" together with Roland Teubner.

As the decade grew older, however, Prückner started to move towards on-camera acting. He first featured prominently as an inmate in Reinhard Hauff's prison drama "Die Verrohung des Franz Blum" ("The Brutalisation of Franz Blum",1974) and then found steady work in various made-for-TV films. The social drama "Familienglück" (1975) brought about his first starring role, a turner unable to cope with family life and his job. His second much noticed role had him play an impoverished wood carver in Hans W. Geißendörfer's debut feature "Sternsteinhof" a year later. Prückner's performance in the blunt Heimatfilm garnered him a nomination for the German Film Awards.

These films established a type cast role for Prückner that he fulfilled with ease: Whenever there was a need for an outsider, an oddball, a petty criminal, he would be the go-to guy. For his starring role as small-time crook "Paganini" in the slapstick comedy "Bomber & Paganini" where he played alongside Mario Adorf ("Bomber"), he was awarded the Deutsche Darstellerpreis in 1976. In Edgar Reitz's "Der Schneider von Ulm" ("The Tailor from Ulm", 1978) he starred as Albrecht Ludwig Berblinger, a dreamer and flight pioneer who tries to fulfill his vision of flying no matter what others may think. The last film of the 1970s starring Prückner was the satirical "Der Willi-Busch-Report" ("The Willi Busch Report") where, in 1979, he played a frantic newspaper man trying to boost the sales of his product. The film went on to win the Max-Ophüls-Preis.

In the 1980s, Tilo Prückner mostly worked for German television with some remarkable exceptions: He became known to a worldwide audience when he featured as Night Hob in Wolfgang Petersen's box office hit "Die unendliche Geschichte" ("The NeverEnding Story", 1984). A few years later, the critically acclaimed British TV series "Traffic" featured him as a narcotics detective.

The 1990s then saw the actor prove his talent for comedy as well: In "Deutschfieber" (1992), the sequel to "Der Willi-Busch-Report", he returned to play Willi Busch, this time next to Christiane Paul as the protagonist's illegitimate daughter. Then, a year later, Prückner first featured as the hypochondriac inspector Gernot Schubert in "Adelheid und ihre Mörder", a long-running comedy-drama TV series that was a favorite with both the audience and critics alike.

In 1999, Prückner returned to the stage after years of abstinence and played the lead in his own play "Meier muss Suppe essen" which premiered at the off-venue "Teatr Kreatur" in Berlin. The same year, he featured in the elaborate TV adaptation of Victor Klemperer's diaries ("Klemperer – Ein Leben in Deutschland").

With the start of the new millennium, Tilo Prückner was cast in a reprising role as wayward detective Eduard Holicek, starring alongside Robert Atzorn in the Hamburg edition of the German cop series "Tatort" (2001-08). Another crime series, "Kommissarin Lucas", also featured him in a reprising role as the protagonist's cranky landlord. In the 2000s he could also be seen in various ambitious made-for-TV films as well as in a couple of features on the big screen, such as Andreas Dresen's drama "Willenbrock" (2005) where Prückner played a used car salesman.

The second half of the decade saw the actor featuring in smaller roles in the Academy-Award-winning Austrian-German coproduction "Die Fälscher" ("The Counterfeiters", 2007) and Dresen's tragicomedy "Whisky mit Wodka" ("Whisky with Vodka", 2009). He was also part of the cast of "Iron Sky", a crowdfunded Scifi-Nazi-parody that premiered at the Berlin IFF 2012.

Late in 2013, Tilo Prückner published his first novel titled "Willi Meerkatz wird verlassen" to universal acclaim. The book reflects Prückners personal experience of a marriage failing after 36 years and the subsequent impetuous re-start. While he had mostly been working in television in the early 2010s, 2014 marked the year of his return to the big screen, when he featured in Marco Kreuzpaintner's comedy "Coming In". Three additional films were to follow the same year and in 2015: Prückner had strong performances in feature roles in Til Schweiger's box office hit "Honig im Kopf", the horse movie "Ostwind 2" ("Windstorm 2") and in the comedy "Kleine Ziege, sturer Bock" ("Stroppy Cow, Stubborn Ram") where the actor embodied the father of the protagonist played by Wotan Wilke Möhring.

For television he made the series "Rentnercops" (2015-2019) in which he starred as reactivated detective Edwin Bremer who returns from retirement to tackle bizarre cases working in an illustrious team of mixed age. In 2016 he was seen twice as Kluftinger senior in the "Kluftingerkrimis", and as stubborn Rudi Weissglut in the "Krause" films "Krauses Hoffnung" (2016) and "Krauses Umzug" (2020).

Of course, the tireless Prückner also took on numerous other TV parts, for example as a loving grandfather in "Ein Lächeln nachts um vier" (2017). In 2019, the crook comedy "Alte Bande" brought him together once again with his "Bomber & Paganani" co-star Mario Adorf: the two played aging jailbirds, planning an escape.

Tilo Prückner had his last cinema appearances as a barfly in the pub milieu study "Leif in Concert - Vol. 2" (2019) and again as a friendly riding instructor in the sequels "Ostwind: Aris Ankunft" (2019) and "Ostwind - Der große Orkan" (2020). He did not live to see the premiere of this last film: Tilo Prückner died in Berlin on July 2, 2020 at the age of 79.