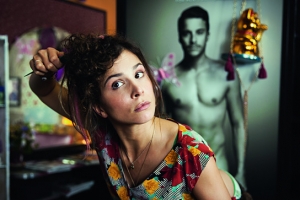 Berlin celeb hair dresser Tom Herzner falls in love with Heidi, the quirky owner of a neighborhood hair salon. So far so good. Only one problem: Tom is gay.

Tom Herzner is attractive, glamorous, and gay: the personification of the cosmopolitan self-confidence that made Berlin hip. He runs an elegant men's salon with his own new product line.

At a photo shoot, he bumps into unconventional Heidi, owner of a local beauty parlor, who not only volunteers her thoughts on Tom's products and style, but agrees with Sam from the cosmetics company, that everything focuses too much on men. Sam urges Tom to launch a women's shampoo.

Tom says he knows nothing about women and what they want. Sam tells him to find out - quickly. Otherwise, Tom and his boyfriend and partner Robert will be saddled with the start-up costs for the product line. Robert accompanies Sam to New York to close the deal, leaving Tom to do research at Heidi’s salon, Bel Hair, on his new target group - women.

Heidi gives Tom a butch makeover and renames him Horst. And it isn't long before he realises what he's feeling for Heidi isn't entirely platonic, nor entirely gay, for that matter....