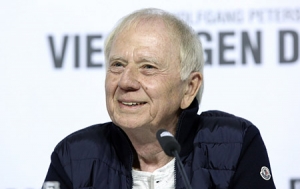 Wolfgang Petersen at a press conference for "Vier gegen die Bank" in Berlin on November 2, 2015

Wolfgang Petersen, born March 14, 1941, in Emden, grew up in Hamburg. During his time at school, he already tried to become a filmmaker and directed his first films on 8mm film. In 1960, 19-year old Petersen got a job at Hamburg's Junges Theater where he worked as an assistant director and actor for four years. At the same time, Petersen attended Hamburg's drama school and graduated in 1963.

He started to study theatre studies in 1965, but already dropped out of university after a year to study directing at the newly-set up Deutsche Film- und Fernsehakademie Berlin (dffb). After his graduation film "Ich werde dich töten, Wolf" ("I Will Kill You, Wolf", 1971) had been shown on ARD television, Petersen often worked for TV productions in the following years. He directed several episodes of the successful TV crime film series "Tatort" for NDR, and finished ambitious TV movies like "Smog" (1973) for WDR.

In 1974, Petersen made his debut as a director on the movie screen with "Einer von uns beiden" ("One or the Other"). The psychological thriller starred Klaus Schwarzkopf and Jürgen Prochnow in the leading roles. During his career, Petersen worked repeatedly with both actors. The psychological drama about a professor who is extorted by a student won a Filmband in Gold at the 1974 German film awards.

In 1977, two films by Petersen caused a significant stir with audiences and critics alike: His "Tatort" film "Reifezeugnis", that saw a very young Nastassja Kinski as a seduced school girl, and the TV movie "Die Konsequenz" ("The Consequence") that dealt with homosexuality, at the time a taboo topic. For the conservative Bayerischer Rundfunk, the film was too provocative. Thus, the TV station took to a strong form of censorship: The station stopped the already running broadcast of the film.

In 1978, Petersen who occasionally directed commercials and Michael Bittins set up the production company Radiant-Film that produced several of Petersen's films. In 1980, Petersen received an offer from the producer Günter Rohrbach, then head of Bavaria Film, to direct a major production about the battle of submarines in World War II: "Das Boot" ("The Boat") turned out to be an enormous box office hit but received controversial reviews because of its portrayal of the submarine war. The film nevertheless won a Filmband in Silber and a Bavarian film award. In the USA, the intense drama became the by then most successful foreign language film ever and received six Academy award nominations. In 1985, the more than five hours long TV version that permitted a detailed plot development won an Emmy and the TV award of the British Film Academy.

After this overwhelming international success, Petersen was entrusted to direct the fantasy epic "Die unendliche Geschichte" ("The Neverending Story", 1984). With a budget of more than 50 million Deutsche Mark, the film version of Michael Ende's bestseller was the by then most expensive post-war film production in Germany – but at the box office alone, the film grossed 120 million Deutsche Mark and thus gave Petersen another hit film. He then received the obvious offer from Hollywood: In 1984, Petersen directed the Hollywood production "Enemy Mine". Three years later, he relocated to Santa Monica, California, a suburb of Los Angeles, and set up a US production company together with Gail Katz. After the less successful thriller "Shattered" (1991), Petersen landed his first big box office hit with the Clint Eastwood thriller "In the Line of Fire". He then further established his reputation as a precise and efficient craftsman in the director's chair and experienced director of action films with the virus thriller "Outbreak" (1995) that was inspired by George A. Romero and the action film "Air Force One" (1997). Thus, Petersen rose to the top flight of Hollywood directors.

In a way, Petersen returned to his beginnings with "A Perfect Storm" (2000). The story of fisherman boat in heavy distress at sea reminded many critics of "Das Boot". "A Perfect Storm" also became a huge box office hit, in contrast to Petersen's following films: Both his period drama "Troy" (2004), starring Brad Pitt and the disaster movie "Poseidon" (2006) underperformed at the box office.

It took almost ten years until Wolfgang Petersen started a new film project, which also marked his return to Germany as a director: The gangster comedy "Vier gegen die Bank" (2016), a remake of this 1976 TV feature film, tells the story of four unlike men who are conned by a bank director. When they can't get their money back with legal means, they decide to rob the bank.