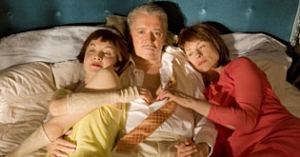 The actor Otto Kullberg is a man women love and men like. Sometimes he drinks a little too much. When his excessive drinking leads him to miss a day on the set of his new film and it seems like he′s about to blow the whole thing, a younger actor is hired to shoot all the scenes a second time as a backup solution: Leo the producer is not willing to lose any money.

Otto, a man of fast wit and driven by his need to be at the center of attention, finds himself forced to assert his role on the set, in a 1920′s costume to decide between the love for two women, and to redefine his role in his own life. Many films ago, there was a love story between Otto and his partner Bettina, who is now the wife of the director. Does the distinction between film and reality fade away? In the duel between the actors on set, no one wants to be the loser. Everyone loves the truth and everybody lies.

Not to mention, you really shouldn′t mix whisky and vodka.