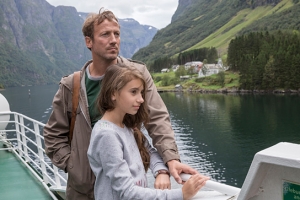 If aspiring singer Jakob can earn a crust performing as Elvis to rapturous pensioners, he'll bite that bullet. But his next job is transporting a valuable breeding ram to Norway by car since the beast is afraid of flying. Just before setting off, Jakob receives a call from a former flame to announce that her – and, thus, also his – 12-year-old daughter Mai wants to pay him a visit. Before he knows what's happened, she's on his doorstep and then an unexpected passenger in the car to Norway. The further north they travel, the more petulant Mai becomes, with Jakob increasingly out of his depth at coping with the bleating ram in the back and a "stroppy cow" next to him on the passenger seat...