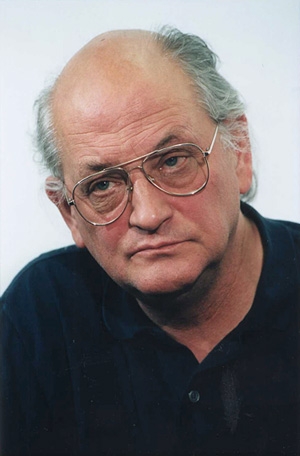 The son of a deputy head of section studied German studies and dramatics in Vienna and Munich and participated in student theatre groups. After a traineeship in the department of entertainment of Bavaria Atelier GmbH, he was employed as an assistant editor and director and dropped out of university. In 1963, he started to direct TV shows and assisted directors like Michael Pfleghar, Heinz Liesendahl and Rolf von Sydow with shows, TV movies, documentary films, and feature films.

From 1966 to 1970, Hauff directed "Wirb oder stirb", a satire about the advertising industry, as well as musical shows starring, for instance, Wilson Pickett and Janis Joplin. In 1968/69, he directed "Untermann – Obermann", a portray of two aging circus artists, together with Volker Koch. In his first TV movie, "Die Revolte" (1969), Hauff depicted the attempt of the student movement to politically activate an employee. In "Ausweglos" (1969/70) and "Offener Haß gegen Unbekannt" (1970), he processed the authentic life stories of prisoners, inspired by reports of Martin Walser.

"Mathias Kneißl" (1970/71), the story of a Bavarian robber from the turn of the century, became Hauff’s first internationally noticed film. In 1973, he set up the Bioskop GmbH in Munich together with Volker Schlöndorff and Eberhard Junkersdorf. Except for the TV movie "Zündschnüre" ("Fuses", 1974), that – based on a novel by Franz Josef Degenhardt – depicted the resistance of adolescents during the Nazi regime, Hauff’s films mainly focused on the stories of outsiders: "Die Verrohung des Franz Blum" ("The Brutalisation of Franz Blum", 1973/74), based on the autobiographical report by Burkhard Driest (with whom Hauff collaborated repeatedly), tells the story of a man’s career in prison, while "Paule Pauländer" (1975/76) depicts the extreme living conditions of an adolescent in the country. Hauff then problematised his experiences with lay actors that he had made in these movies in "Der Hauptdarsteller" ("The Main Actor", 1977). The screenplay to the film was written by Christel Buschmann.

In "Messer im Kopf" ("Knife in the Head", 1978), Bruno Ganz played a biochemist who gets shot during a police raid and painstakingly has to find back his identity. The film turned out to be a box office hit and won the Filmband in Silber, among other awards. "Endstation Freiheit" ("Slow Attack", 1980) and "Der Mann auf der Mauer" ("The Man on the Wall", 1982), based on a story by Peter Schneider, also dealt with the contemporary German society in a critical way. "Stammheim", a reconstruction of the trial against the terrorist group Rote Armee Fraktion, written by Stefan Aust, won the Golden Bear at the 1986 Berlinale, a decision that led to a jury scandal.

With "Linie 1" ("Line 1", 1987/88), an adaptation of the satirical musical by Grips Theater, Hauff joined his musical roots with his political involvement. Subsequent to the three-part TV movie "Mit den Clowns kamen die Tränen" (1990), based on the novel by Johannes Mario Simmel, Hauff focused on the promotion of young filmmakers. In 1993, he became the head of Deutsche Film- und Fernsehakademie Berlin (dffb). At the German film award 2005, Reinhard Hauff received the honorary award for his lifetime achievement. His older brother is the TV director, producer, and festival director Eberhard Hauff.