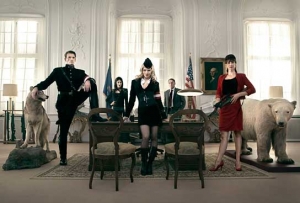 Following their unusually successful science-fiction cult parody "Star Wreck", the Finnish guerrilla filmmakers of Energia Productions return to our screens with "Iron Sky", a hysterical piece of tomfoolery that rolls wildly confused Nazi esotericism and fascistic-techno-mysticism into one big parody.

Unknown to the world, at the end of 1945, a group of scientists from the Nazi fortress of New Swabia in the Antarctic escaped in space rockets to the dark side of the moon. Here, in complete isolation from the rest of the world in a sublunary military base known as the 'Black Sun', a cosmic Nazi Armada of UFOs is being constructed with the intention of subjugating the world's population. Panic arises, however, when the imminent arrival of a US space shuttle is announced. It's 2018, and mission 'meteor Blitzkrieg' begins. The Nazis land in New York – but secret agent Renate has her own plans …

The breathtaking mix of concept art, extraordinary graphic design and artistic opulence contained in this intoxicating space odyssey will surely guarantee cult status for "Iron Sky" which, made with support of a vast internet community, splendidly fulfils all the criteria for an over-the-top trashy B-movie-cum-exploitation film full of cheap thrills.