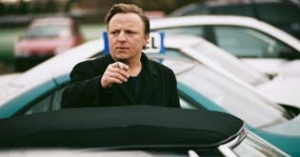 Willenbrock
Bernd Willenbrock is a second-hand car salesman. Business is good, he has a beautiful wife, a mistress, a house on a new estate and a place in the country. He has just one employee, Jurek, an experienced car mechanic from Poland, who gets the cars ready for sale. Most of his customers are from eastern Europe. One of them is Krylow, a dubious Russian businessman, who turns up every few weeks or so and always buys up several cars at once. Their regular business deals mean that the two men have developed a relationship of trust of which Jurek does not approve at all. Willenbrock is quite content with his life. But then, all at once, several cars disappear without a trace from the yard. In order to show that he is prepared to do something about the burglary he hires a night watchman. Not only does Fritz look after the yard and the cars, he also happens to have a pretty daughter. However, this young student doesn’t seem to have the slightest interest in either second-hand cars or in her father’s boss. This only serves to spur Willenbrock’s ambition – without making him forget either his wife or his mistress. Willenbrock is real skirt-chaser.

However, his life comes under serious threat when he and his wife are mugged at their holiday home by Russian burglars – who are quickly caught and deported like a shot. Things threaten to spin out of control and Jurek is the only one to offer his active support.