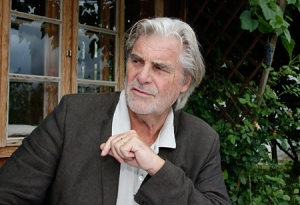 Peter Maria Simonischek was born on August 6, 1946 in Graz, Austria, and grew up in the East Styrian municipality of Markt Hartmannsdorf. He gained first experience in acting at his boarding school's theater in Sankt Paul im Lavanttal. After graduating from high school, Simonischek attended architecture school against his father's wish, who wanted him to pursue a medical career. To please his father, Simonischek temporarily trained as a dental technician parallel to his studies but eventually decided against it.

On the other hand, his fascination with acting became so strong that he secretly enrolled at the Graz Akademie für Musik und darstellende Kunst from 1968 to 1970. It paid off as he subsequently found work at various Swiss stages, including St. Gallen and Bern, as well as at the Staatstheater Darmstadt (1974-1976) and at the Schauspielhaus Dusseldorf (1976-1978). In 1979, Simonischek became a member of the Berlin Schaubühne ensemble, where he worked in numerous productions until 2002. Since 1982 he also plays leading roles at the Salzburg Festival.

In addition to his work on stage, Peter Simonischek began to work for television and cinema in 1980. He received some attention for his starring role in the four-part TV movie "Lenz oder die Freiheit" (1986), based on the novel by Stefan Heym about the turbulent life of a German revolutionary who has to flee the country after the Baden Revolution of 1848/49 and starts to fight for the Union army in the American Civil War. In Margarethe von Trotta's drama "Fürchten und Lieben" (1988), a loose adaptation of Chekhov's "Three Sisters", he played a married university professor who becomes the love interest of two sisters. Next, Simonischek embodied a lecherous shepherd who is confronted with an incarnation of the devil in the seclusion of the Swiss Alps, in the film "Sukkubus" (1988), directed by Georg Tressler. The Swiss mountains also provided the backdrop for "Der Berg" (CH 1990), a drama based on a true story of 1922, about the deadly rivalry between two weather stations. The award-winning Peter Härtling adaptation "Krücke" (1993) showed Simonischek as the owner of a jazz club who, along with two boys and a Jewish waitress, has to cope with World War II in its final throes.

From the mid-1990s, Peter Simonischek worked primarily in TV productions when he was not on the stage. For his portrayal of a scenographer with Alzheimer's in "Reise in die Dunkelheit" (1997, TV), he was nominated for the Grimme-Preis. In the crime series "HeliCops - Einsatz über Berlin" he had a recurring role as a member of the eponymous helicopter team from 1998 to 2001. During this time, in the 1999/2000 season, Simonischek first became part of the Vienna Burgtheater ensemble, and he still is today.

On the big screen, he starred in "Gebürtig" (AT/DE/PL 2002), as a Jew who can be persuaded to testify against a former concentration camp guard, and in Hans Steinbichler's family drama "Hierankl" (2003), as a fellow student of the main character played by Josef Bierbichler. For "Hierankl" he was awarded the Grimme-Preis together with the rest of the main cast and the director. In the children's film "Mozart in China" (AT/DE/VR 2008), he had a supporting role as the father of the ten-year-old protagonist - who was played by his real-life son Kaspar.

Simonischek's major television roles include two collaborations with director Vivian Naefe: In the romantic comedy "Einmal so wie ich will" (2004, TV), where he featured alongside Senta Berger and Götz George, he played a husband who gets into an argument with his wife while on vacation in Africa; Naefe's comedy "Mit einem Schlag" (2008, TV) showed him as unfaithful husband who suffers from acute amnesia after a stroke - or maybe doesn't. This role garnered Simonischek a nomination for the Bavarian Television Award and a nomination for the Austrian Film and Television Award 'Romy'. He received another Grimme-Preis (together with his co-stars) for Matti Geschonneck's "Liebesjahre" (2011). There, he starred as a divorced man who gets into an argument with his ex-wife (Iris Berben) about their failed relationship and their new partners (Nina Kunzendorf and Axel Milberg). In addition to other roles in TV dramas, Simonischek had a recurring role in the crime series "Bella Block" in 2012/2013, as the new boyfriend of the eponymous investigator.

In the next years, Peter Simonischek returned to the movies more often. In the period film "Ludwig II." (2012) by Peter Sehr and Marie Noelle he featured as the Bavarian politician Ludwig von der Pfordten; in Götz Spielmann's family drama "Oktober November" (AT 2013) he played a dying father, who is visited by his unequal daughters and confronts them with a long-repressed secret. For the successful fantasy trilogy "Rubinrot" ("Ruby Red", 2013), "Saphirblau" ("Sapphire Blue", 2014) and "Smaragdgrün" ("Emerald Green", 2016), he slipped into the role of the scheming grand master Leopold von St. Germain. The historical biopic "Lou Andreas-Salomé" (2016) showed him as the strict father of the title character.

Peter Simonischek then received widespread critical and popular attention for his starring role in Maren Ade's "Toni Erdmann" (2016). The story of a quirky father in a bizarre disguise who visits his daughter, a consultant in Bucharest, and brings her career as well as her life out of balance, premiered in competition at the Cannes Film Festival. There it became an audience's and critics' favorite - not least because of Simonischek's outstanding performance. "Toni Erdmann" was awarded the FIPRESCI Prize for Best Film. In July 2016, it opened in German cinemas.

Also in 2016, in Austria, Simonischek was honored with the prestigious title 'Kammerschauspieler' after having already received a number of awards for his stage performances.

Dani Levy cast him as the father of a dysfunctional family in the comedy "Die Welt der Wunderlichs" ("Wunderlich's World", 2016), in the TV two-parter "Das Sacher. In bester Gesellschaft" ("Hotel Sacher", AT/DE 2016) he was an intriguing family patriarch. The award-winning gangster film "Nur Gott kann mich richten" ("Only God Can Judge Me", 2017) showed him as the father of Moritz Bleibtreu's main character. In the award-winning "Der Dolmetscher" ("The Interpreter", SK/CZ/AT 2018) Simonischek had a leading role as the son of an SS war criminal, in Thomas Vinterberg's military drama "Kursk" ("The Command", BE/LU/FR 2018) he was a Russian submarine admiral.

He took on a more peaceful role in Dror Zahavi's "Crescendo #makemusicnotwar" (DE/IT/AT 2019), as a conductor who is to lead a Palestinian and an Israeli youth orchestra to a joint performance in Tel Aviv.

Peter Simonischek was married in first marriage with actress Charlotte Schwab. His sons Max and Kaspar are also actors; his younger brother is the actor and director Reinhard Simonischek.