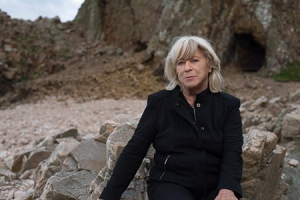 Margarethe von Trotta, born in Berlin on 21st of February 1942 as daughter to painter Alfred Roloff and his wife Elisabeth von Trotta, moved to Düsseldorf with her mother after the end of the war. After finishing secondary school, she studied at the commercial college for two years before working in an office for a couple of months. During a stay in Paris, she got into contact with the film scene and was involved in the shooting of a film. After catching up on her A-levels, she briefly studied Art but soon took up German and Roman Studies in Munich instead. In parallel, she attended acting school.

Following this, she worked at theatres in Dinkesbühl, Stuttgart and Frankfurt and appeared on TV and in films from 1967 on. With Volker Schlöndorff, whom she met in 1969 and to whom she was married to from 1971 to 1991, she realised the film adaptation of Brecht’s "Baal"and over the course of their careers, the two have been collaborating numerous times. Starring in some of Rainer Werner Fassbinder’s and Herbert von Achternbusch‘s films, Margarethe von Trotta became one of the best-known acting talents of New German Cinema.

She has been co-authoring a number of Schlöndorff’s films, such as "Der plötzliche Reichtum der armen Leute von Kombach" ("The Sudden Wealth of the Poor People of Kombach", 1971), "Strohfeuer" ("A Free Woman", 1972) and "Der Fangschuß" ("Coup de grâce", 1976). Also together with Schlöndorff, she co-authored and co-directed the adaptation of Herinich Böll’s "Die verlorene Ehre der Katharina Blum" ("The Lost Honour of Katharina Blum"). Taking a stand on the political debates around Red Army Faction terrorism, the film was a huge box office success, despite receiving some hostile treatment from conservatives.

In 1977, she shot her first own film: "Das zweite Erwachen der Christa Klages" ("The Second Awakening of Christa Klages") tells the true story of a kindergartener in Munich, who robbed a bank to get money for a day-care nursery. Her next film as a director "Schwestern oder die Balance des Glücks" ("Sisters or the Balance of Happiness", 1979) portrays three very different women, among them two sisters, and their relationship with one another. Two sisters are also in the focus of her third film "Die bleierne Zeit" ("Marianne and Juliane", 1981), which became a big and international success. Loosely based on the real-life sisters Gudrun und Christiane Ensslin, the film reflects on different forms of political activism and the confrontation with the inflexibility of society. Among other prizes, "Die bleierne Zeit" won the Golden Lion at the International Film Festival in Venice and a special pize at the Deutscher Filmpreis.

Her next project "Heller Wahn" ("Sheer Madness", 1983) about an intensive and momentous friendship between two women received mixed reviews. In 1985, she realized "Rosa Luxemburg", an extravagant portrait that looked into the political and private life of the socialist and revolutionary with Barbara Sukowa in the lead role. For her performance in the film, Sukowa was awarded the Deutscher Filmpreis in 1986. Von Trotta then contributed the segment "Eva" to the anthology film "Felix" (1987).

After "Fürchten und Lieben", an adaptation of Cechov‘s "Three Sisters" (1988), "Die Rückkehr" ("The African Woman", 1990), the story about a ménage à trois, and "Zeit des Zorns" ("The Long Silence", 1993), a drama about a courageous woman fighting the mafia, she shot another box office success in 1994: "Das Versprechen" ("The Promise"), a love story between an East German and a West German spanning several decades. She won the Bayerischer Filmpreis as Best Director and the film was submitted as the German entry for the Oscars in the Best Foreign Language Film category.

Following this, von Trotta did some TV work including the multi-award-winning miniseries "Jahrestage" (2000) based on Uwe Johnson's tetralogy of novels, before she shot her next feature film "Rosenstraße" about "Aryan" women protesting on behalf of their Jewish husbands during the Nazi period in Berlin. Her TV film "Die andere Frau" ("The Other Woman") tells the love story between a woman and a former "Stasi Romeo".

After shooting the star-studded psychological drama "Ich bin die Andere" ("I Am the Other Woman", 2006, with Katja Riemann, Armin Mueller-Stahl und August Diehl in the lead roles), von Trotta took on another historical topic: In "Vision – aus dem Leben der Hildegard von Bingen" ("Vision: From the Life of Hildegard Von Bingen", 2009), she tells the story of the legendary mystic, who became famous as a healer and as an early champion of women’s rights.

Her next feature film "Hannah Arendt" with Barbara Sukowa in the lead role was based on yet another real-life figure and portrays the life and works of the Jewish German-American philosopher and journalist, who left Germany in 1933 and worked extensively on National Socialism and on fundamental questions of ethics, power and constitutionality. The film premiered at the Toronto International Film Festival and went on to win a number of awards.

In "Die abhandene Welt" ("The Misplaced World", 2015) about a widower who believes to recognize his deceased wife in a picture of an American opera singer, von Trotta once more focused on family relationships. An easier topic was the comedy film "Forget About Nick" (2017) about two very disparate women, who have to share a luxury apartment in New York.

Von Trotta has also been working as a theatre director and was involved in the dubbing of a number of foreign language films, e.g, as a supervisor in the Louis Malle’s "Pretty Baby" (1978) and as dubbing director of Paul Mazurski's "An Unmarried Woman" (1978) and Léa Pool's "Anne Trister" (1986).

Since 2004, she has been teaching as a professor at the European Graduate School in Saas-Fee, Switzerland. With her first husband (married to  from 1964 to 1970), she has a son, Felix Moeller, who is also a filmmaker. Von Trotta lives in Paris and Munich.