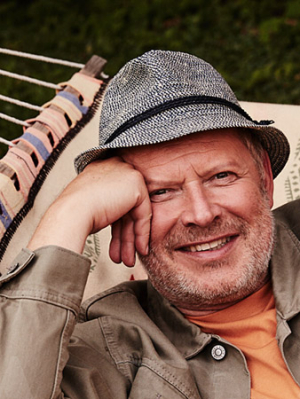 Axel Milberg, born August 1, 1956, in Kiel as the son of a female doctor and an attorney, graduated from drama school at the end of the 1970s at Otto-Falckenberg-Schule in Munich where he subsequently worked as a cast member at Kammerspiele, and played characters such as Don Juan and Nathan the Wise under directors like Dieter Dorn, Peter Zadek, and Alexander Lang. Milberg already made his movie debut in 1981 in "Neonstadt" but focused on his theatre career during the 1980s. He did not start to appear in numerous smaller movie and TV roles before the beginning of the 1990s, for instance in TV series like "Derrick" and "Wolffs Revier".

Milberg made his breakthrough on the movie screen in 1995 with Hans-Christian Schmid's "Nach fünf im Urwald" ("It's A Jungle Out There") as a middle-class father and jazz fan that rediscovers his youth after his daughter (Franka Potente) has run away from home. In Sherry Horman's "Irren ist männlich" ("Doubting Thomas", 1996), Milberg played a neurotic, and in Nico Hofmann's TV remake of "Es geschah am hellichten Tag" (1996) he played the psychopathic murderer Schrott.

Again and again, Milberg portrayed violent and/or neurotic characters, for instance in Roland Suso Richter's prison drama "14 Tage lebenslänglich" ("14 Days to Life"). He also delivered a strong performance as an opportunist in "Der Campus" ("Campus", 1998). Milberg's appearance always oscillating between the inconspicuous and the inscrutable has been convincing in unfathomable as well as in good-natured or mildly eccentric parts.

Milberg's most important TV roles include "Seitensprung in den Tod" ("Comforting Certainty of Death", 1997), the Uwe Johnson adaptation "Jahrestage" (2000), his portray of Veit Harlan in Horst Königstein's film "Jud Süß – Ein Film als Verbrechen?" (2001), and his role as Friedrich Fromm in Jo Baier's film "Stauffenberg" (2004). In 2001, Axel Milberg played the part of inspector Klaus Borowski in "Stahlnetz – PSI"; since 2003, he successfully plays the same character in the Kiel branch of the "Tatort" crime series. In 2007, Milberg also played the title role in the successful TV series "Dr. Martin". One more example in a long series of roles of driven characters is the role of the manager who is always pressed for time in Detlef Bothe's film "Neben der Spur" ("Tour Exzess", 2007).

At the Bayerischer Fernsehpreis 2008 he won the award for Best Actor for his role in "Doktor Martin" playing the eponymous village physician. Milberg featured in other TV productions as well, such as in Florian Gärtner's film adaptation of "Das Feuerschiff" (2008) as gang leader Caspary, in the drama "Stille Post" (2008), as a man whose marriage is put to the test, and the fairy tale adaptation "Das tapfere Schneiderlein" (2008) as good King Ernst.

In 2009, Milberg was back on the big screen: He featured as a Berlin detective in Tom Tykwer's thriller "The International" as well as the father of amateur private eye Justus in the children's film "Die drei ??? – Das verfluchte Schloss". In Philipp Stölzl's "Goethe!" (2010) he had a minor role as a publisher. His major work at the time, however, was still in TV. He played Harry Stürmer, the German correspondent to Turkey in the award-winning docudrama "Aghet – Ein Völkermord" (2010, TV) while in another docudrama, "Eichmanns Ende" (2010, TV), he impressed the audience as the legendary district attorney Fritz Bauer.

In the drama "Liebesjahre" (2011, TV), directed by Matti Geschonneck, he played the new lover of a divorcée (Iris Berben) who has trouble accepting her ex-husband's (Peter Simonischek) new relationship (Nina Kunzendorf). The film won the Grimme-Preis in 2012. The same year, Milberg was nominated for another Bayerischer Fernsehpreis for the "Tatort" episode "Borowski und die Frau am Fenster".

While he was still working mostly in TV, Milberg's presence on the big screen started to increase in 2012 and 2013: In Margarethe von Trotta's "Hannah Arendt" (2012) he featured as Arendt's husband, the German-American philosopher Heinrich Blücher, in "Ludwig II." (2012) he was part of the ensemble cast as King Maximilian II. Furthermore he played important roles in the film adaptations "Rubinrot" ("Ruby Red", 2013) and "Feuchtgebiete" ("Wetlands", 2013).

His TV work would, however, still be his mainstay. Beside his ongoing role as detective Borowski in the Kiel edition of the "Tatort" franchise, Milberg also featured as a German intelligence officer in the award-winning docudrama "Eine mörderische Entscheidung" (2013, TV) about a devastating bombing by the German air force in the Afghani city of Kundus in 2009. Among his other important works for TV are the historical drama "Die Hebamme" (2014, TV) and the Dani Levy comedy "Der Liebling des Himmels" (2015, TV) in which he played alongside Mario Adorf. The drama "Meister des Todes" (2015, TV) which received critical praise for its controversial subject, the entanglement of politics and the military industry, featured Milberg as the CEO of a weapon manufacturer. In another film much liked by the critics, the docudrama "Letzte Ausfahrt Gera – Acht Stunden mit Beater Zschäpe", Milberg played the role of judge Manfred Götzl. In 2016, he was part of the cast of the German-South African mini-series "Cape Town", this time playing an unscrupulous villain.

Besides his theatre career and his film career, Axel Milberg is also well-known as the voice of the German audio books of the Swedish novelist Henning Mankell.