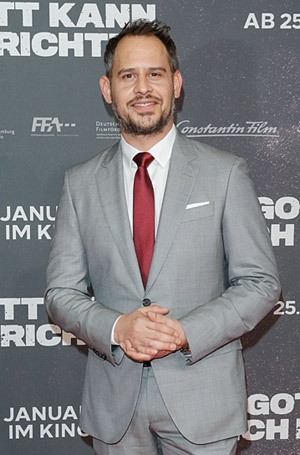 Moritz Bleibtreu at the premiere of "Nur Gott kann mich richten" in Frankfurt on January 22, 2018

Moritz Bleibtreu was born August 13, 1971, in Munich, as the son of the actors Monica Bleibtreu and Hans Brenner. He started his acting career in Rainer Boldt's children's film "Ich hatte einen Traum". After eleventh grade, Bleibtreu went to Paris as an au pair. After taking several acting classes and travelling abroad for nearly four years altogether, Bleibtreu became a cast member of Thalia Theater, and then of Schauspielhaus, both in Hamburg. From 1987 on, he starred in several TV movies and films, including larger parts in Peter Timm's "Einfach nur Liebe" ("Simply Love", 1994) and in Bernd Schadewald's "Kinder des Satans" (1995).

Bleibtreu then worked with director Rainer Kaufmann for the TV crime film "Unschuldsengel" and starred in the romantic comedy "Stadtgespräch" ("Talk of the Town"), also by Kaufmann. Bleibtreu's portrayal of the naive, gay carpenter Karl caused a stir, as did his part as a slow-witted gangster in Thomas Jahn's comedy "Knockin' on Heaven"s Door". Bleibtreu won the Ernst Lubitsch award for these two parts, and also won a Filmband in Gold for his performance in "Knockin' on Heaven's Door".

In Tom Tykwer's successful episodic film "Lola rennt" ("Run Lola Run"), Bleibtreu played the desperate and clumsy Manni. In 1999, he starred in Matthias Glasner's film "Fandango", as well as alongside Christiane Paul in Fatih Akin's "Im Juli" ("In July"), a romantic comedy that goes back and forth between Germany and Turkey. And in Oliver Hirschbiegel's thriller "Das Experiment" ("The Experiment", 2002), Bleibtreu portrayed a cab driver who more and more fails to control a psychological experiment he has volunteered for.

In 2002, Bleibtreu played the son of an Italian guest worker in "Solino", directed by Fatih Akin. Then, in 2004, Bleibtreu played an uptight, sex-obsessed librarian in Oskar Roehler's tragicomedy "Agnes und seine Brüder" ("Agnes and his Brothers"), the story of three dissimilar brothers. And in Helmut Dietl's melodrama "Vom Suchen und Finden der Liebe" ("About the Looking for and the Finding of Love", 2004), Bleibtreu is looking for true love that, in a satiric allusion to the legend of Orpheus, would outlive even death itself.

After another role in a film by Oskar Roehler, "Elementarteilchen" ("Elementary Particles", 2006) after the novel by Michel Houellebecq, Bleibtreu played a cynical TV producer becoming idealistic in Hans Weingartner's "Free Rainer" and a gangster boss in Özgür Yildirim's "Chiko". Then producer legend Bernd Eichinger casted him for the role of Andreas Baader in his starstudded adaptation of Stefan Austs book on the Rote Armee Fraktion, "Baader Meinhof Komplex" (2008).

In the movie season 2009/2010, Bleibtreu remained a permanent fixture on the movie screens and played equally contrasting, yet challenging roles in a series of prestigious film productions: After a leading role in Fatih Akin's award-winning neighborhood comedy "Soul Kitchen", Bleibtreu was seen in Philipp Stölzl's period piece "Goethe!" (2010) as Goethe's rival in love. He also played the cousin and confidant of German rapper Bushido in the biopic "Zeiten ändern sich" (2010), an Italian gangster in the crime film comedy "Jerry Cotton" (2010), and Hitler's propaganda minister Joseph Goebbels in Oskar Roehler's film "Jud Süß" (2010).

Also in 2011, the tragicomedy "Mein bester Freund" premiered at the Berlin IFF. In it, Bleibtreu plays the Jewish son of a gallery owner, who is betrayed by his best friend during the Nazi reign. The following year, Moritz Bleibtreu starred in Dennis Gansel's "Die vierte Macht": He plays a journalist who becomes entangled in a murderous intrigue in Moscow. The same year, he played a former soldier and good friend to Til Schweiger's bodyguard in the thriller "Schutzengel" ("Guardians").

In 2013, Bleibtreu starred in four theatrical releases: He played the sensitive son of a successful businessman in Oskar Roehler's family drama "Quellen des Lebens" ("Sources of Life"), a WHO scientist in the US blockbuster production "World War Z", an actor who is mistakenly presumed dead and subsequently takes on the identity of an Indian bank manager in the comedy "Vijay und ich - Meine Frau geht fremd mit mir", and an associate of WikiLeaks founder Julian Assange in "The Fifth Estate" (UK/BE).

In Xavier Koller's adaptation of "Die schwarzen Brüder" ("The Black Brothers", 2013), a book for adolescents, Bleibtreu had a sinister part as a child trafficker in 19th century Italy. Afterwards, he starred in the comedy "Nicht mein Tag" ("Not My Day", 2013) as a slightly dim-witted bank robber and featured in Maximilian Erlenwein's thriller "Stereo" (2014) where his character pursues and threatens an ex-con (Jürgen Vogel) who is about to start a new life. Fatih Akin hired Bleibtreu for his political drama "The Cut" (2014) where the actor played the part of a German-American entrepreneur who helps an Armenian search for his children in the 1920s.

A rare leading part in television followed when Bleibtreu was signed for the crime series "Schuld nach Ferdinand von Schirach". He starred as a criminal defense lawyer whose cases often confront him with ambivalent ethical questions. After a brief appearance as Gustav Klimt in the British drama "Woman in Gold" (2015), Bleibtreu featured in the successful children's film "Rico, Oskar und das Herzgebreche" ("The Pasta Detectives 2", 2015) as a crook who is giving the young heroes a hard time.

"Die dunkle Seite des Mondes" ("The Dark Side of the Moon", 2015), a more heavy-going philosophical drama based on a novel by Martin Suter, held a part for Bleibtreu as a careerist commercial lawyer whose life goes off the rails after consuming hallucinogenic mushrooms.

In the summer of 2015, the extremely versatile Moritz Bleibtreu stood in front of the camera for Johannes Naber's "Das kalte Herz" ("Heart of Stone"). In the gloomy fairytale adaptation, he played the key role of the grim Holländer-Michel.

After that, he starred in director Christian Zübert's "Lommbock" (Release date: March 2017), the sequel to cult stoner film "Lammbock" ("Lammbock - Shit Happens") of 2001. Alongside Lucas Gregorowicz he returns to play the role of Kai, the food and marihuana delivery guy.

Bleibtreu then played the lead role as a criminal defense lawyer in the TV series "Schuld" (2015-2017). Director Sam Garbarski cast him as a Jewish holocaust survivor for his post-war drama "Es war einmal in Deutschland..." ("Bye Bye Germany", DE/BE/LU 2017); in Özgür Yildirim's gangster film "Nur Gott kann mich richten" ("Only God Can Judge Me") Bleibtreu portrayed a criminal just released from prison. After starring in another genre film, the psycho thriller "Abgeschnitten" (2018), he could be seen in a major role in Sebastian Schipper's "Roads" (2018), which was released in German cinemas in May 2019.

Bleibtreu also played an important role as the unscrupulous confidant of a populist politician in the highly acclaimed TV remake of Fritz Lang's classic "M - Eine Stadt sucht einen Mörder" ("M – A City Hunts a Murderer", 2019). A box office success was the musical film "Ich war noch niemals in New York", in which he played a leading role alongside Heike Makatsch. In addition, Bleibtreu continued to play the role of the defence attorney Friedrich Kronberg in the television series "Schuld".