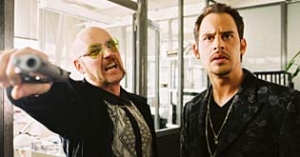 Oscar-winning German director Pepe Danquart (Black Rider/Schwarzfahrer) traveled to Vienna this spring to shoot his second feature film "C(r)ook" which assembled an impressive cast including Henry Huebchen, Moritz Bleibtreu, Corinna Harfouch and Josef Hader. "It′s a gangster farce, a genre film on the comedy level but also bitter and cruel and there are some really profound moments," Danquart says, "It′s a bit like Snatch."