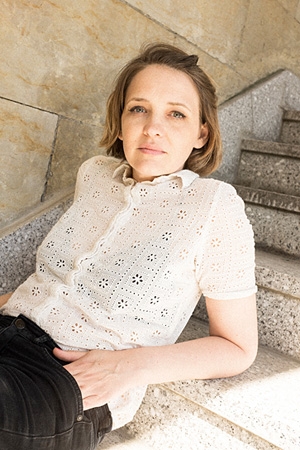 Laura Maori Tonke was born in Berlin on April 14 1974. The daughter of set designer Michael Tonke made her screen debut at the age of seventeen as the female lead in Michael Klier's "Ostkreuz". After graduating from high school, Tonke studied drama in Berlin. During that time, she occasionally appeared in TV productions, including Thomas Arslan's "Mach die Musik leiser". From 1997 on, she pursued a professional acting career with memorable roles in Tom Tykwer's "Winterschläfer" ("Wintersleepers", 1997), Bernd Schadewald's "Der Pirat" (1997, TV), the comedy "Gangster" (1999, TV) and Dominik Graf's "Bittere Unschuld" (1999, TV).

Major breakthroughs for Tonke were her lead roles in the theatrical releases "Baader" (2002) and Eoin Moore's "Pigs Will Fly" (2002). Her performances in these two films won her the New Faces Award and also garnered her a nomination for Best Supporting Actress at the 2003 German Film Award. Also in 2003, she made her stage debut at the Volksbühne in Berlin, where she was to perform frequently in the following years.

On screen, Tonke impressed critics and audiences alike with her turn in Michael Klier's psychological drama "Farland" (2004). After starring in Christoph Hochhäusler's "Falscher Bekenner" ("Low Profile", 2005) and Eoin Moore's ensemble comedy "Im Schwitzkasten" ("No Sweat"), Tonke was one of four female actors who talk candidly about the highs and lows of their profession in Rolf Peter Kahl's documentary "Mädchen am Sonntag" ("Sunday Girls").

Between 2007 and 2008, she appeared in a string of TV productions, among them Peter Keglevic's "Tarragona - Ein Paradies in Flammen" ("Day of Disaster", 2007) and Adolf Winkelmann's acclaimed drama "Contergan" ("Side Effects", 2007). After she proved her comic chops in the Swiss romantic comedy "Madly in Love" (CH 2009), Tonke starred in Rolf Peter Kahl's "Bedways" (2010) and had a recurring role in the critically lauded TV series "KDD – Kriminaldauerdienst". While remaining in high demand on TV, she was also one of the leads of the low-budget theatrical release "Worst Case Scenario" (2014). In 2015, Laura Tonke got rave reviews for her portrayal of a young mother who suddenly suffers from panic attacks in Sonja Heiss' tragicomedy "Hedi Schneider steckt fest" ("Hedi Schneider Is Stuck").

At the Hessischer Film- und Kinopreis 2015, "Hedi Schneider steckt fest" was awarded Best Feature. In 2016, Laura Tonke won the German Film Award for both Best Actress and Best Actress in a Supporting Role for "Hedi Schneider steckt fest" and "Mängelexemplar" ("Too Hard To Handle") respectively. In 2017, Laura Tonke starred in the theatrical releases "Axolotl Overkill" and "Sommerhäuser" ("The Garden").

In 2018, Tonke had leading roles in two award-winning relationship stories: The cinema production "Zwei im falschen Film" ("Mission: Love") was about a seemingly happy couple who suddenly question their own relationship after watching a romantic movie; the TV drama "Bist du glücklich?" ("Are you happy?") told the story of an ex-couple who get together once again to sell the vacation home they share. Tonke was nominated for the German Film Critics' Award for "Zwei im falschen Film," and for the German Television Award for "Bist du glücklich?".

She had further cinema roles in the children's film "TKKG" (2019) as the mother of the young detective "Klößchen", and in "Mein Lotta-Leben - Alles Bingo mit Flamingo!" ("My Life as Lotta", 2019), as the mother of the title character. She was part of the main ensemble of the Til Schweiger "Tatort" episode "Tschill Out" (2020), playing a social worker, and was a psychotic killer in the Magdeburg "Polizeiruf 110" episode "Der Verurteilte" (2020) - for this role she was awarded the German Screen Actors Award. In the first season of the German-Danish disaster series "Sløborn" (2020) she once again played the mother of a main character

In the idiosyncratic love story "A E I O U - Das schnelle Alphabet der Liebe" (" A E I O U - A Quick Alphabet of Love", 2022), Tonke made a guest appearance as a newspaper editor, and for "Mein Lotta-Leben - Alles Tschaka mit Alpaka" (2022), she once again slipped into the role of Lotta's mother. After that, Laura Tonke played two leading roles alongside Moritz Bleibtreu: In the satirical comedy "Caveman" (release: January 2023), she embodied the unnerved wife of Bleibtreu's title character; in "Fifty Fifty - Eine Erziehungskomödie" (release: 2024), the two play an ex-couple who, despite their separation, go on vacation with their eleven-year-old son.