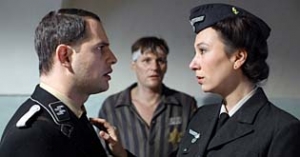 Vienna in the 1930s. Victor Kaufmann, the son of a wealthy cosmopolitan Jewish couple, works in his father’s art gallery. His best friend whom he has known since childhood and from whom he is inseparable, is Rudi Smekal. Victor’s girlfriend, the attractive and vibrant Lena, is also a friend of Rudi’s. In a moment of exuberance Victor shows his friend a well-kept family secret: a drawing by Michelangelo that was believed lost. It comes as a terrible shock to Victor to learn that Rudi has long been a member of the Nazi party and is hoping that Austria’s annexation to Germany will improve his career chances with the Nazis. Having missed the right moment to flee Austria, the Kaufmanns are now stuck in Vienna. They transfer their estate to Lena in an attempt to protect it from being confiscated.

Having bragged about the Michelangelo drawing, Rudi receives an order from Berlin to seize the art work. In order to save his old friends, Rudi suggests a deal: the drawing in exchange for the Kaufmanns’ freedom. But he has overestimated his influence. No sooner does the drawing fall into the hands of the Nazis than the Kaufmann family is sent to a concentration camp. Rudi gets engaged to Lena. Years later, with Germany’s successful belligerence on the wane, it is decided that the Michelangelo drawing will be presented to the Duce as a gift from the Führer in order to seal the alliance with Italy. But the drawing turns out to be a fake and now the real Michelangelo must be found. Rudi is given an order to retrieve Victor from the concentration camp and bring him to Berlin to be interrogated. Their plane is shot down, killing the crew – the two friends are the only survivors.