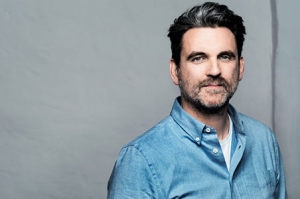 Sebastian Schipper was born May 8, 1968, in Hannover. After finishing high school, he studied acting at Munich's Otto Falckenberg Schule from 1992 to 1995. Schipper performed at Munich's Kammerspiele and appeared on the movie screen in Sönke Wortmann's comedy "Kleine Haie" ("Acting It Out", 1992) while he still studied acting.

Schipper then mainly starred in supporting roles on the movie screen, for instance, as a German soldier in the US production "The English Patient". He was also seen in two films by director Tom Tykwer, in "Winterschläfer" ("Wintersleepers", 1997) and in "Lola rennt" ("Run Lola Run"). Tom Tykwer also acted as X-Filme's co-producer for "Absolute Giganten" ("Gigantic"), Sebastian Schipper's debut feature film as writer and director. The film about three adolescent friends who spend their last night in Hamburg together was highly praised by critics and won numerous awards, including the German film award in Silver.

Again as an actor, Schipper starred in Tykwer's "Der Krieger und die Kaiserin" ("The Princess and the Warrior", 2000), in the boxing drama "Elefantenherz" ("Elephant Heart", 2002), and in Romuald Karmakar's "Die Nacht singt ihre Lieder" ("Nightsongs", 2004), that ran in the Berlinale competition. With "Ein Freund von mir" ("A Friend of Mine", 2006), Schipper who also directed several commercials in the meantime presented his second film as a director. Oscillating between the genres of comedy and of character study, the film – starring Daniel Brühl, Jürgen Vogel, and Sabine Timoteo in the leading roles – tells the story of the close friendship between two rather different men.

Sebastian Schipper's following project, the film "Mitte Ende August" ("Sometime in August"), was a rendition of Goethe's novel "Wahlverwandtschaften" and told the story of a group of people that is going through emotional turmoil during one summer in a house in the country side.

The following years saw Schipper mainly working as an actor. He received a nomination for the Preis der deutschen Filmkritik for his lead performance in Tom Tykwer's "Drei" ("Three", 2010). Directors Maria Noelle and Peter Sehr cast him as the aged monarch in "Ludwig II" (2012), and Schipper also played supporting roles in the TV comedy "Überleben an der Wickelfront" (2012), Achim von Borries' mystery "Alaska Johansson" (2013, TV) and Feo Aladag's war drama "Zwischen Welten" ("Inbetween Worlds", 2014). From 2013 on, Schipper had a recurring role as the former colleague and best friend of the lead police detective – played by Wotan Wilke Möhring – in the Hamburg branch of the TV series "Tatort". Schipper also appeared opposite Kim Basinger in Anders Morgenthaler's thriller "I Am Here", which premiered at the 2014 Hamburg Film Festival and opened in cinemas July 2015.

Six years after "Mitte Ende August", Sebastian Schipper returned as a director with "Victoria", which relates the story of five young people whose night out in Berlin takes a dramatic turn. The film premiered in the competition of the 2015 Berlin IFF, won the Silver Bear for Best Camera, followed by six German Film Awards and opened in cinemas in June 2015.

"Toni Erdmann" (2016), which Schipper co-produced, turned out to be a massive success as well. In the autumn of 2017, Schipper began production on his next feature "Caravan", in which two unlike 18-year-olds ride in a stolen RV on a life-changing trip from Morocco across Europe.