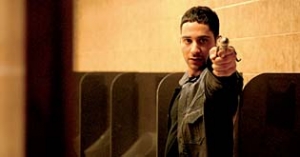 Chiko has high hopes. He dreams of wealth, power, respect and recognition. He and his pals Tibet and Curly have decided to grab a piece of the action in the local drug scene on his Hamburg high rise estate. Chiko forces a street dealer to give him the name of the man he works for – Scholle. When they pay Scholle a visit at his apartment, Chiko uses brute force to make sure that he will let his boss know that, from now on, Chiko is the top man. Shortly afterwards, the trio are kicking a ball about on the street when two guys roll up in a Mercedes and ask Chiko to get in – their boss wants to see him. Music producer and drug boss Brownie asks Chiko to tell him how he envisages repaying the damage he has done. But it′s all perfectly clear to Chiko. All Brownie has to do is drop Scholle and let him flog the drugs instead.

Impressed by his self-confidence, Brownie gives Chiko the job to distribute ten kilos of grass in ten days. But on no account is he to sell on the street – he must use an apartment that Brownie puts at his disposal. This is the opportunity that Chiko has been waiting for. Before long operations are running at full swing. The money begins to flow and it looks as though Chiko and his friends are one step closer to fulfilling their dreams. A white Mercedes, a chopper motorcycle, women and influence – it′ll all soon be at their fingertips. But then Tibet makes a grave mistake and Chiko has to decide between wealth and friendship, power and loyalty, Brownie and his old mate …