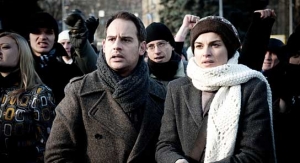 Still with Moritz Bleibtreu, Kasia Smutniak (both in the front)

Berlin-based journalist Paul Jensen experiences a life crisis. He flees to Moscow, where his mentor Alexej Onjegin wants him to relaunch a struggling tabloid. Covering the glamorous life and antics of Russia's power elite, Paul's life appears to be one big party. That's until he meets mysterious Katja, with whom he falls in love despite his cynicism. Katja convinces Paul to publish a political piece, which has drastic consequences. Paul witnesses a bombing which kills Katja, and is then accused of being a member of a terrorist organisation. He is jailed in one of Russia's most notorious prisons, and suffers horribly, until his friend Onjegin finally manages to get him released. But Paul's enemies have not given up.