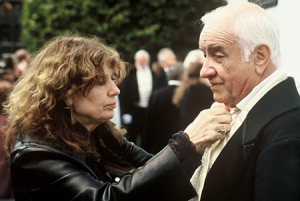 Barbara Baum is regarded as one of the most renowned costume designers in Germany with a special feeling for historical fabrics. After serving an apprenticeship as a tailor, she studied art and costume history and began working as a fashion designer. She first got involved with the film industry working for directors Peter Fleischmann, Peter Lilienthal and Reinhard Hauff.

The actual beginning of her career is linked first and foremost with Rainer Werner Fassbinder, whom she met in 1972. She designed the costumes for "Effi Briest" and then worked with him for ten years until his death. Their joint productions include "Die Ehe der Maria Braun" ("The Marriage of Maria Braun", 1979), "Lola" (1981) and "Lilli Marleen" (1981). For Bernhard Sinkel's "Väter und Söhne - Eine deutsche Tragödie" ("Fathers and Sons: A German Tragedy", 1986) she designed the costumes for Julie Christie, who left her the dedication "To my dear brilliant Barbara who made me look so good" on a photo. When designing costumes, Barbara Baum has always been doing extensive research, taking an in-depth look at the respective roles as well as the personalities of the actors.

Also internationally sought-after, the costume designer was involved in numerous co-productions such as "Homo faber" (1991) or "Das Geisterhaus" ("House of the Spirits", 1993). In 1992/93 she met Stanley Kubrick, who hired her for his project "Aryan Papers" (the film was never realized and the extensive preparations stopped). For her costumes to Andrew Birkin's "Brennendes Geheimnis" ("Burning Secret") Barbara Baum was awarded a prize in Venice in 1988, for her complete works she received the Bavarian Film Award in 1993. In 2008 she was again awarded the Bavarian Film Award together with production designer Götz Weidner for the production of Heinrich Breloer's "Buddenbrooks".

In 2015 she was awarded the German Film Prize for outstanding services to German film.