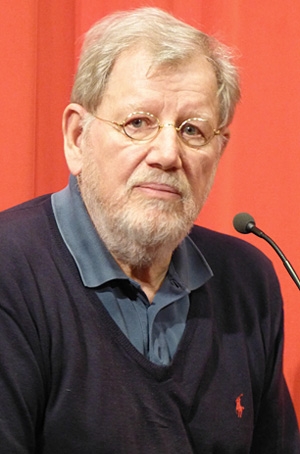 Bernhard Sinkel in the Deutsches Filmmuseum, Frankfurt am Main, April 3, 2014

Bernhard Sinkel was born on January 19, 1940 in Frankfurt am Main. While studying drama and law in Munich, he performed at the University theatre and also appeared  political skits at the Rationaltheater. After obtaining his degree, he practised as a lawyer and was head of research at the German news magazine "Der Spiegel" from 1970-1972.

From 1972 on, he was an author, director, illustrator and producer for the Unabhängige Lichtspielmanufaktur U.L.M., a division of the Ulmer Institut für Filmgestaltung, which was also the professional base of filmmakers like Alf Brustellin, Edgar Reitz und Alexander Kluge. Sinkel made numerous features for the German edition of the children's programme "Sesame Street", thus learning the practical side of filmmaking on the job.

In 1973, Bernhard Sinkel made his feature-length debut with the made-for-TV drama "Clinch", and in the same year, he began the work on his first theatrical release "Lina Braake oder Die Interessen der Bank können nicht die Interessen sein, die Lina Braake hat". Shot on a miniscule budget, the film became one of the first box-office hits of Young German Cinema. The socially aware comedy about an 81-year-old woman who successfully battles the improper business practices of a bank premiered in the Forum section of the 1974 Berlin IFF and won the Interfilm Award. It went on to win the Ernst-Lubitsch-Award and a German Film Award (Silver) for Best Feature Film, while another German Film Award (Gold) went to lead actress Lina Carstens.

One year prior, Sinkel and Alf Brustellin co-founded their own company, ABS-Film-Produktion. Acting as co-authors and co-directors, they made two feature films: the critically acclaimed "Berlinger"(1975) and "Mädchenkrieg" (1976), an adaptation of the eponymous novel by Manfred Bieler. The latter film won the Director Award at the 1977 San Sebastián IFF as well as two German Film Awards. In addition to this, Sinkel and Brustellin contributed three segments to the compilation film "Deutschland im Herbst" (1978).

Until Brustellin's death in an accident in 1981, the two continued to work together on several projects on which Sinkel was the sole director: the results were "Taugenichts" (1978) and "Kaltgestellt" (1980), which premiered in competition at the Cannes IFF.

In the 1980s, Sinkel helmed three ambitious TV-miniseries: "Bekenntnisse des Hochstaplers Felix Krull" (1981), based on the novel by Thomas Mann; "Väter und Söhne" (1985), the chronic of a German industrial dynasty and their collaboration with the Nazi regime, and the biopic "Hemingway" (D/USA 1988).
In the 1990s, Sinkel prepared for a film project about a conductor under the working title "Maestro", and as a part of his research, he himself conducted several operas. During that time, he also completed his feature film "Der Kinoerzähler", which stars Armin Mueller-Stahl as a 1930s film narrator, who is about to lose his job due to the introduction of sound and hopes for the Nazis to save silent movies. The film won the Confédération internationale des cinémas d'art et d'essai (CICAE) Award and a Bavarian Film Award for Best Costume.

After his project "Der Maestro" had to be cancelled in 1999, because the already promised funding was suddenly denied three weeks before shooting, Sinkel retired from filmmaking. He instead turned into a prolific writer: among his published books are the crime novel "Bluff" (2003), the thriller "Der dritte Sumpf" (2005) and "Augenblick der Ewigkeit" (2010), which tells the story originally intended to be the plot of "Der Maestro".