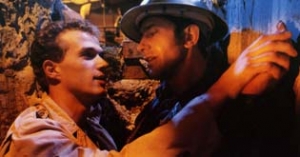 Fassbinder's film adaptation of the novel "Querelle de Brest" by Jean Genet: Querelle, a young sailor, murders his accomplice Vic after a drug deal. He starts affairs with the bar owner Nono and the corrupt policeman Mario and experiences humiliations, staged as power games, as confirmation of his identity. However, he only feels affection for Gil, the bricklayer who has murdered a colleague. The police hold the fugitive Gil responsible for both murders. Querelle betrays Gil to the police and leaves the city as the lover of the ship's lieutenant Seblon - whose tape diary, together with the off-screen narrator, functions as a running commentary.