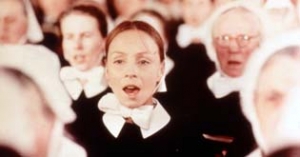 Margit Fliesser is a woman in her mid-thirties who works as a mathematician in a medium-sized company; she has two children and has been divorced twice. Her colleagues like her, respect her professional skills and accept her peculiar attributes; she is somewhat shy and rather repressed.

The reason for this lies in her past, not least in her childhood. Following her mother′s premature death, Margit becomes a nurse trainee in a Protestant order but at some point she realizes that this vocation is not really fulfilling. She then enters a university preparatory college where she studies with a lecturer, who later becomes her first husband. Bachmann, however, is not only her first great love, but also her first great disappointment. Her second relationship - to a blind man - turns out to be a let-down as well. She now decides to take things into her own hands. She picks her "third man" herself, no longer leaving it up to fate to make decisions for her. Although this involves considerable efforts on her part - and calls for the help of her friend Lucie - Margit achieves her goal: she wins over her colleague, Hrdlitschka, as her third husband.