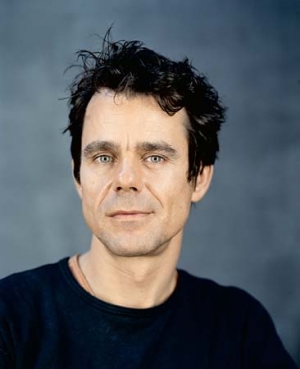 Tom Tykwer grew up in Wuppertal. In 1976, he started to film with a Super 8 camera before he began to work in arthouse cinemas in 1978. He then moved to Berlin and became the head of the Moviemento off-cinema in Berlin-Kreuzberg. Besides, he worked as a screen play editor and made portraits of directors for TV productions.

He already became interested in formal narrative techniques in his early short films: "Because" (1990) presented three variations of the same initial situation, while "Epilog" (1992) framed different versions of an argument between two lovers in an infinite loop.

In 1992, Tykwer and producer Stefan Arndt jointly set up the production company Liebesfilm that also produced his first feature-length film "Die tödliche Maria" ("Deadly Maria", 1993), a film that won the prize of German film critics. The chamber-play like psycho-drama impressed with its elaborate aesthetic composition and its nightmarish atmosphere.

In 1994, Tykwer and Arndt joined forces with the directors Dani Levy and Wolfgang Becker to set up the production company X-Filme creative pool. Tykwer and Becker then co-wrote the screen play to Becker's multiple award-winning metropolitan ballad "Das Leben ist eine Baustelle" ("Life Is All You Get", 1996).

In 1997 and 1998, Tykwer finished two films in a short period of time that turned him into one of the most promising young directors of German cinema: "Winterschläfer" ("Wintersleepers") starts with an accident in the winter and approaches its protagonists – four young people and an older farmer – in concentric circles. The wide screen images contrast impressive mountain landscapes with claustrophobic interiors that again prove the innovative handling of filmic techniques of composition by Tykwer and his preferred cinematographer Frank Griebe (who won the Filmband in Gold).

"Lola rennt" ("Run Lola Run", 1998) is situated in mid-1990s Berlin and tells the story of Lola (Franka Potente) who has to procure 100.000 Deutsche Mark within the next 20 minutes to save her boyfriend Manni (Moritz Bleibtreu). The formal experiment – three variations of the same initial situation – that provided a dynamic editing sequence (the film was fully developed on the storyboard) and a techno soundtrack (Tykwer himself composed the music) became one of the most successful German films of the year and was also successful with international audiences. The psycho-thriller "Heaven" (2001) resulted from a collaboration with Krzystof Kieslowski who wrote the film's screenplay and dispensed with spectacular effects to a large extent.

During the following years, Tykwer mainly appeared as a producer. He only directed the romantic short film "True" that premiered at the 2004 Berlinale and was highly praised by critics.

In 2006, Tykwer finally returned as a feature film director with the eagerly awaited film version of the best-selling novel "Das Parfum – Die Geschichte eines Mörders" ("Perfume – The Story of a Murderer"). Despite ambivalent reviews, the film became an outstanding box office hit and won six German as well as two European film awards.

Tykwer filmed his next project, the thriller "The International" at numerous international locations with a cast of stars including Clive Owen, Naomi Watts, and Armin Mueller-Stahl. The film's premiere opened the 2009 Berlinale film festival.

Following the short "Feierlich reist" – part of the film compilation "Deutschland 09" which he also co-produced – Tykwer shot his first feature film completely set in Germany in years: "Drei" ("Three") tells of a Berlin couple – and the fact that both partners unknowingly fall in love with the same man. "Drei" received numerous accolades, including the German Film Awards for Best Editing, Best Lead Actress and Best Director.

Tykwer next teamed up with American filmmakers Andy and Lana Wachowski ("The Matrix") for the epic and star-studded adaptation of the bestselling novel "Cloud Atlas". The lavishly produced drama was released in November 2012 and went on to win five German Film Awards.