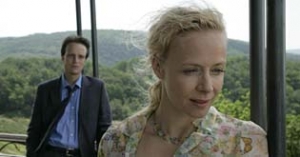 I am the other Woman

In this adaptation of Peter Märtesheimer′s novel, the young and successful engineer Robert Fabry gets involved in a one-night stand with the seductive Carlotta whom he met by chance. On the next morning she has disappeared without a trace but Robert meets her again the following day. It turns out that in real life Carlotta is a hard-nosed lawyer by the name of Carolin Winter. Robert falls for this equally beautiful and enigmatic woman and even breaks up with his girlfriend to marry Carolin. He is unaware of the fact that Carolin has a split personality and suffers under the influence of her despotic father and his mysterious housekeeper. Bit by bit, Robert learns more about the ruptured family and even risks his own life in an attempt to help Carolin.