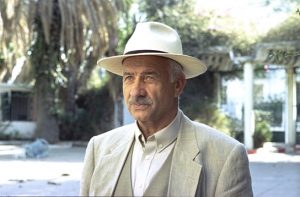 At the centre of the film is Tangiers - Europe′s gate to Africa, with the legendary reputation from the forties and fifties when, as an international zone, the city served as a playground for mad millionaires and famous artists, a focus for secret agents and all kinds of crooks, a Mecca for speculators and gamblers,

an Eldorado for the pleasure-seeking haute volée. Tangiers - a sound that is bewitching and fantastic. The film about these "golden years" in Tangiers traces its fascination and myth through a kind of critical homage. The film consists of a mixture of interviews with well-known and unknown witnesses of those times, historical material and, of course, images from the present, filmed while on the quest for the traces of those days in the streets, cafes, hotels and bars. This is all brought together by a fictional story of a former secret diplomat who returns to the "white city" of Tangiers for the first time after four decades to trace events which have never given him peace; above all, the painful loss of his sweetheart Marie who died in 1956 in a bomb attack by the liberation movement shortly before Morocco′s independence. He comes back to Tangiers, full of memories and Marie′s voice in his heart.