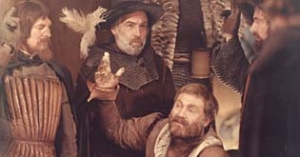 The knight Götz von Bredow owns a pair of trousers made from elk leather that have a special feature: Whoever is wearing them becomes invulnerable. However, nobody is allowed to wash the trousers because then they would lose their special power. Unfortunately, neat Brigitte wants to clean the trousers, not knowing what she would do to them. At the same time, Privy Council Lindenberg loses a large amount of money while gambling at Bredow′s house – and wants to cover his losses with an armed robbery. At first, the respectable knight Bredow is among the suspects because his trousers were somehow involved in the robbery. But then, Lindenberg is convicted of the crime. At court, Lindenberg is sentenced to death causing his four minions to declare war on the Prince-elector who is responsible for the verdict. They follow him to his hunting ground in the Köpenick heath – and it is knight Bredow who finally steps in and saves the life of the Prince-elector.