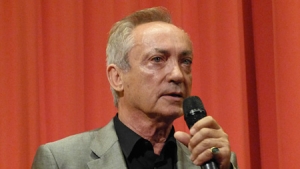 Udo Kier at the Deutsches Filmmuseum in Frankfurt on July 3, 2014

Udo Kier was born in Cologne on October 14th 1944. After completing an apprenticeship as a mechanic, he began working in the assembly line at Ford. After a short while, Kier relocated to London, where he took language classes and was offered his first film role. While "The Road to St. Tropez" marked his screen debut, Kier was also in demand as a male model and was featured in numerous magazine spreads.

Also among his earliest film appearances was a role in the European exploitation flick "Hexen bis aufs Blut gequält" – also known as "Mark of the Devil" –, which at that time shocked audiences with explicit depictions of violence. Kier himself soon became a true cosmopolitan, living wherever his talents were wanted. After making the acquaintance of Factory filmmaker Paul Morrissey, he was cast in the titular roles of "Frankenstein" and Dracula", and the two Warhol productions gained him prominence in the underground and arthouse cinema.

Other Euro-productions followed, among them "L'histoire d'O" ("The Story of O", 1975) and Dario Argento's gory cult thriller "Suspiria" (1977). But In 1977, Kier shot a film in Germany: "Bolwieser" ("The Stationmaster's Wife") was his first collaboration with Rainer Werner Fassbinder, and Kier not only acted in the film, but also served as assistant director. He later returned to work on several other Fassbinder films, notably "Lola" and "Lili Marleen".

By then, Kier was already an industrious actor, shifting effortlessly – and at times with visible joy – between highbrow auteur films and trashy genre fare. 1986 "Egomania" saw him working for the first time with director-provocateur Christoph Schlingensief, and Kier would become a steady presence in the artist's subsequent films.

He forged an even more important creative partnership with Danish director Lars von Trier: Starting with "Epidemic", Kier appeared in nearly all of von Trier's films, leaving indelible impressions with his turns in "Europa", the acclaimed TV-series "The Kingdom", and the musical / melodrama "Dancer in the Dark".

In the early 1990s, mainly thanks to his performance in Gus van Sant's "My Own Private Idaho", Kier also had his breakthrough in the US. From then on, the charismatic actor was in high demand in Hollywood, taking supporting roles in blockbusters like "Armageddon" and "Blade" Kier while also keeping himself busy with juicy parts in numerous B- and C-productions of the horror and science-fiction variety.

Despite his successful movie career, Udo Kier always remained a true renaissance man: He worked on books, gave lectures and generally has shown interest in all forms of art. Among his latest acting endeavours in the German-speaking areas are the children TV-programme "4 gegen z" and the history spoof "Tell".

One of his more bizarre screen characters appeared in the science-fiction spoof "Iron Sky", which premiered at the 2012 Berlin IFF. Kier plays a Nazi who fled to the Moon in 1945 and now plans to invade Earth with his minions. Also in 2012, he had an uncredited cameo as a witch hunter in Rob Zombie's horror film "Lords of Salem" (US/UK/CND). Following his small but memorable turn as a waiter in Lars von Trier's  "Nymphomaniac" (DK/D/F/B/S 2013), he played the head of a psychiatric ward in the horror comedy "The Editor" (CND 2014). Also he voiced the villain Mr. Toad in the animated TV series "Beware the Batman" (2013/14).

Kier himself became the subject of the documentary "Arteholic", in which director Hermann Vaske portrays the eccentric cult actor and art lover.

Also in the next years Kier could be seen in a series of very different productions: He belonged to the ensemble of Guy Maddin's experimental mystery drama "The Forbidden Room" (CN 2015) and played a therapist in the coming-of-age tragicomedy "Coconut Hero" (DE/CN 2015). In the conspiracy thriller "Courier X" (US 2016), which is based on real events, he has a leading role as sn ex-Stasi agent and CIA informer, in Alexander Payne's futuristic satire "Downsizing" (US/NO 2017) he played his signature role as a highly eccentric bon vivant.

Kier showed his dark side in Craig S. Zahler's much acclaimed exploitation film "Brawl in Cell Block 99" (2017), as the diabolical henchman of a mafioso. Under Zahler's direction he also played a supporting role as a criminal businessman in the gangster film "Dragged Across Concrete" (2018). Dark and mysterious characters remained Kier's speciality: David Schalko cast him in his series adaptation "M - Eine Stadt sucht einen Mörder" ("M - A City Hunts a Murderer", 2019) as a manic, mysterious children's photographer; the Czech Second World War drama "The Painted Bird" (2019) shows him as a psychotic, brutal miller. For his role in this film, which celebrated its world premiere at the Venice Film Festival, Kier received much praise from critics.

Udo Kier lives in the USA and Europe.