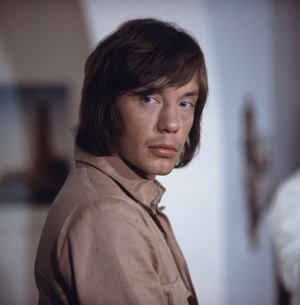 Marquard Bohm is the brother of actor and director Hark Bohm. He grew up on the North Sea island of Amrum and went to school in Hamburg before starting an apprenticeship as a gardener in Detmold. Bohm later worked as a trainee for Geyer film laboratories, among other jobs. Besides his work, Bohm appeared as an extra, for instance in the TV movie "Der Fall Kapitän Behrens" (1965), directed by Wolfgang Staudte. He met with young Hamburg film makers and made his own experimental short film "Na und" with the help of Helmut Herbst. In this film about the daily routines of an unemployed man, Bohm also played the leading role.

In 1967, he became an assistant director for Volker Schlöndorff. After starring in several films by Rudolf Thome ("Detektive", "Rote Sonne" ("Red Sun"), "Supergirl"), Bohm was nicknamed the "German Belmondo". In 1970/71, he directed "Terror Desire", a film about a crude extortion story, putting together pieces from gangster films and road movies, nouvelle vague and pop art. Bohm appeared in several films by Rainer Werner Fassbinder, for instance as a private investigator in "Der amerikanische Soldat" ("The American Soldier"), or as a cop in "Wildwechsel" ("Jail Bait ").

During the early 1970s, in the attempt to resurrect the struggling genre cinema, Bohm appeared as a tough bodyguard in Michael Fengler's "Output", or as shepherd Alaska in Hark Bohm's teen movie "Tschetan, der Indianerjunge" ("Chetan, Indian Boy"). He also played a broken character in Hark Bohm's "Nordsee ist Mordsee" ("North Sea Is Dead Sea") and in "Im Lauf der Zeit" ("Kings of the Road") by Wim Wenders.

From the mid-1970s on, Bohm was mainly seen in supporting roles, playing social outcasts. Then, from 1986 on, Bohm was a cast member of Schauspielhaus Bochum. On February 3, 2006, Marquard Bohm died from heart failure after a long illness in Wetter at the Ruhr.