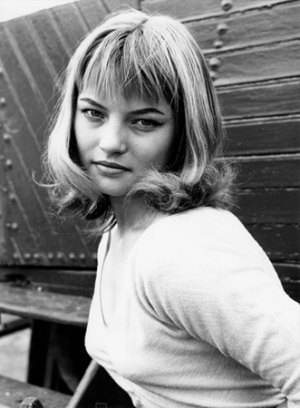 Karin Blauermel, born September 19, 1940, in Berlin-Wedding, grew up with her brother and her grandmother. After finishing secondary school, she attended a school for fashion design. Together with 700 other girls, she applied for a role in the film "Die Halbstarken" ("The Hooligans“) and landed the leading role as well as a three-year contract. In Georg Tressler's film, Baal made a convinving performance as the 15-year old Sissy Bohl, who – with her self-confidence and aplomb – is superior to the boys and in the end does not shy away from taking up arms. Her debut film determined Baal's image on the screen for the next years. She played a teenage delinquent in "Der Jugendrichter" ("The Judge and the Sinner"), seduced the father of her friend in "Die junge Sünderin" ("The Young Sinner"), played a "loose girl" in "Arzt ohne Gewissen" ("Doctor Without Scruples"), and the replacement of the murderer prostitute Nitribitt in "Das Mädchen Rosemarie" ("The Girl Rosemarie").

While she was able to retain her aura of aggressive independence in those roles, Baal was determined to the rather passive role of the threatened blonde innocence in the Edgar Wallace adaptations "Die toten Augen von London" ("Dark Eyes of London") and "Der Hund von Blackwood Castle" ("The Monster of Blackwood Castle"). From the beginning of the 1970s on, Baal predominantly worked for TV productions, mainly in small and mid-sized roles. New German Cinema discovered her rather late and cast her in minor roles as mother, housekeeper, or elderly friend of the heroine.

Fassbinder cast her as Biberkopf"s sister-in-law in "Berlin Alexanderplatz", as a resistance fighter in "Lili Marleen", and as a mother in "Lola". Baal only occasionally appeared in larger roles: In Ula Stöckl's "Erikas Leidenschaften" ("Erika"s Passions"), a two-person film, Baal's role starts out as a "little woman" but becomes more and more confident in the course of the film. In Vadim Glowna's "Desperado City", Baal played a cab driver and was able to show her former strength once more as part of the personality of an elderly woman.

Andreas Kleinert cast her in the TV drama "Hurenkinder" (2008) in a small but significant role: as an aged brothel owner and mother of the main character (Nina Kunzendorf), an unscrupulous journalist. Baal played guest roles in the TV crime series "Soko Köln" (2009) and "Pfarrer Braun" (2009). Her last small appearance in front of the camera was in 2011 in Carlo Rola's road movie "Vergiss nie, dass ich Dich liebe", again as the mother of the main character.

In 2018 Karin Baal was awarded the Götz-George-Prize, which honours primarily older actors who have rendered outstanding services to the acting profession.

Since 1959, Karin Baal regularly performs on stage, for instance in Zürich, at Hamburg's Deutsches Schauspielhaus, an Munich's Kammerspiele, and at Berlin's Renaissance-Theater. From 1960 to 1961, Karin Baal was married to Karlheinz (Kalle) Gafkus, her film partner from "Die Halbstarken". Their son Thomas was born 1960. From 1962 to 1977, she was married to the actor Helmut Lohner. In 1965, she gave birth to her daughter Therese who also became an actress. Baal then married the actor Volker Eckstein, who died of cancer in 1993. Nearly ten years later, she married a young Kurd and saved him from custody pending deportation.