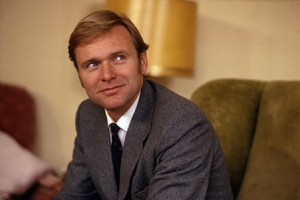 Helmut Griem was born April 6, 1932, in Hamburg as the son of the radio officer Walter Griem and his wife Paula Griem (née Rackebrandt). After graduating from school in 1953, Griem studied philosophy and literature until 1956.

In 1955, he joined the amateur theater group "Theater Frei Haus". Later, he became a member of the literary cabaret group "Hamburger Buchfinken". During one of their performances, Griem raised the attention of Christian Mettin, director of the Städtische Bühnen Lübeck, who offered him the role of Jimmy in Nash"s "The Rainmaker". Griem stayed for one season (1956-1957), played nine other roles and worked as an assistant director. From 1957 until 1960, Griem was engaged at the Städtische Bühnen Köln, where he met Hans Bauer and Hans Lietzau, two directors that had a huge influence on him. In 1957, Griem also stood in front of the live TV camera for the very first time when he played Ruprecht in "Der zerbrochene Krug" ("The Broken Jug").

In 1960, Griem made his screen debut as the idealistic lieutenant Krafft in Frank Wysbar"s soldier crime movie "Fabrik der Offiziere". The movie brought him to the attention of the general public and formed his image as the ideal type of the German officer: upright, dashing, blond, and blue-eyed. In 1961, he enthused his female audience both as the strong and stalwart sailor Dierks in the tearjerker "Bis zum Ende aller Tage" ("Girl from Hong Kong") and as the passionate island doctor Aggersoe in "Barbara". When the collaboration on two foreign productions did not meet with success, Griem decided to withdraw from filmmaking for a couple of years: "Playing Shakespeare in a large theater for the 50th time or shooting a TV production of "Don Carlos" makes me feel more comfortable than spending four week shooting a mediocre movie." (Griem,1965).

At the 1962 Ruhrfestspiele Recklinghausen Griem starred as Diego in Camus’ "The State of Siege", directed by Lietzau. In 1962, he played Ferdinand in a production of Schiller"s "Kabale und Liebe" ("Intrigue and Love", directed by Willi Schmidt). In the same year, he could also be seen as Leonce in Bauer"s production of Büchner"s "Leonce und Lena" at the Landestheater Darmstadt, where Griem made his debut as a stage director in 1956/66 with Harold Pinter"s "The Caretaker". Subsequently, he worked at Vienna"s Burgtheater, the Salzburg Festival, the Munich Kammerspiele, the Schillertheater in Berlin, and the Munich Residenztheater. Griem experienced his two biggest successes with plays directed by his mentor Lietzau: as "Philoktet", based on the play by Heiner Müller, and as Karl Moor in Schiller"s "Die Räuber" ("The Robbers"): "Griem puts on an award-worthy performance… He demonstrates the inner life of someone who is mentally and physically exhausted. Instead of heavily collapsing, he sank to the ground, quietly and without velocity of fall." (J.Kaiser, Theater heute, Nr. 1, 1969).

In 1968, Griem had his breakthrough role in Luchino Visconti"s "La daduta degli dei" ("The Damned"), in which he played the SS officer Aschenbach. The parable saw Griem perverting the image of the good German officer by portraying the Nazi Aschenbach as a charming and sophisticated seducer, a smart Mephistopheles who fuels greed and hatred, thus inciting a whole family to engage in murderous frenzy and incest. In Bob Fosse"s Oscar-winning "Cabaret", Griem played yet another seducer: the bisexual baron Maximilian von Heune who romances both Sally and Brian. With his portrayal of the loyal officer Graf Dürckheim in Visconti"s "Ludwig" (1972), Griem returned to playing idealistic types. Subsequently, he starred as a dedicated Jewish physician in the British-Israeli co-production "Children of Rage", and as a resistance fighter in "La Passante du Sans-Souci".

From 1971 on, Griem appeared in German films again. During this time, German directors increasingly hired stage actors alongside the ("authentic") amateur actors they had preferred before. Although the movies benefited from Griem"s international reputation, his portrayal of unstable characters such as the weary Hans Schnier ("Ansichten eines Clowns"/"The Clown") and the distorted Philip Braun ("Die gläserne Zelle"/"The Glass Cell") had more in common with the broken-down Karl Moor than with the calculating Aschenbach. With his role in "Die Hamburger Krankheit" ("The Hamburg Syndrome"), in which he played a doctor who tries to stop an epidemic from spreading, and his portrayal of a teacher who stands up to the scandalous surveillance methods of the Intelligent Service ("Kaltgestellt"/"Put on Ice"), Griem returned to playing strong and stalwart individualists.


In addition, Griem starred in several stage plays which were filmed for television. In 1988, he played the title role in Dieter Dorn"s "Faust". Furthermore, he took on roles in television productions directed by famous filmmakers such as Rainer Werner Fassbinder ("Berlin Alexanderplatz") and Claude Chabrol ("Les affinités électives").

After a ten-year-break, Griem shot another German TV movie in 1991: In "Eine verlorene Liebe" he played a gardener who is brought to the brink of emotional collapse after the sudden appearance of his 16-years-old daughter. 1994 saw him portraying clerical rulers in two productions: In the two-part TV series "Spion in Schwarz" he played Monsignore Kastner, a man who makes a deal with the CIA, in Peter Ustinov"s "Weltmacht Vatikan" he starred as Martin Luther.

Despite his film success, Griem always returned to the theater. From 1970 until 1972 he performed at the Deutsches Schauspielhaus in Hamburg, e.g. in Shakespeare"s "Richard II", directed by Lietzau, and in Hampton"s "The Philanthropist", directed by Dorn. Subsequently, he followed Lietzau to Berlin. In 1976, Griem signed with the Kammerspiele Munich, where he worked both as an actor (generally in productions directed by Dorn) as well as a director. In 1989, he staged Orton"s "Entertaining Mr. Sloane", and in 1990, he put on Synge"s "The Playboy of the Western World". In 1984, he played Professor Higgins in August Everding"s production of "My Fair Lady" (Theater am Gärtnerplatz). Helmut Griem got married in 1973 and had one son, Philip.