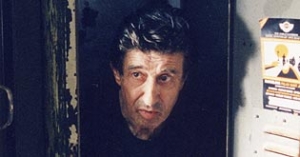 Rolf Zacher, born on 28 March 1941 in Berlin, after completing an apprenticeship as a baker and confectioner, first made his living as a waiter, bartender and singer and was voted the third best rock'n'roll dancer in West Berlin. Together with Peter Przygodda he founded a studio stage in Berlin-Kreuzberg. There he was discovered by director Helmut Käutner, who cast him for "Zu jung für die Liebe?!" (1961, director: Erica Balqué). This role was followed by numerous other film and television appearances from the mid-1960s onwards. Zacher learned pantomime from Samy Molcho, took acting lessons and appeared on stage the Kleine Komödie Hamburg. In 1971 he was singer and tambourine player in the rock band Amon Düül II.

He worked with directors such as Peter Lilienthal, Reinhard Hauff, George Moorse, Ulrich Schamoni and Hans W. Geißendörfer and made his mark on the audience, especially in his roles as a casual and obscure outlaw, petty crook, gambler or boozer. After his appearance in Fassbinder's "Berlin Alexanderplatz" (1980), he received the Federal Film Award for his portrayal of the tragically failing gangster Henry Kirscher in Hauff's "Endstation Freiheit" ("Slow Attack") in 1981.

In the 1980s, Zacher's life oscillated between heroin addiction, rehab and prison - but Zacher remained productive. He had roles in Peter F. Bringmann's "Heartbreakers" (1983), Manfred Stelzer's "Die Chinesen kommen" (1987) and Robert van Ackeren's "Die Venusfalle" ("The Venus Trap", 1988) to name but a few. At the beginning of the 1990s he got his addiction under control. In addition to his work in film, he moderated a video film magazine on TV, devoted himself again to music and opened his own pub in Berlin-Kreuzberg in 1994. On the big screen he could frequently be seen in comedies, for example in "Voll normaaal" (1994) by Ralf Huettner or in 2004 as coach of a gay football team in Sherry Hormann's "Männer wie wir" ("Guys and Balls"). In 2002, Rolf Zacher published his autobiography and named it after his most famous film "Endstation Freiheit".

Between 2004 and 2009, Zacher appeared exclusively in television productions. For example as a gay adoptive father in the comedy "Andersrum" (2005) and in three episodes of the daily soap "Verbotene Liebe" (2008). As a singer he had guest appearances on the album "Mach et einfach" (2007) by the rap duo Icke & Er. At the end of 2008 his own album "Latest Hits" was released.

Oskar Roehler cast Zacher as the subjugated husband and father of the title character Lulu in his unconventional feature film "Lulu & Jimi" (2009). In the low-budget Berlin comedy "Die Liebe und Viktor" (2009) he appeared as Don Quixote; in Doris Dörrie's successful comedy "Die Friseuse" ("The Hairdresser", 2009) he played a petty criminal.

Once again directed by Oskar Roehler, Zacher impersonated film director Erich Engel in "Jud Süss - Film ohne Gewissen" ("Jew Suss: Rise and Fall", 2010). He had a leading role in the slapstick comedy "Ohne Gnade" (2010-2013) as a jerky blackmail victim of two cunning women. Zacher was also working with Oskar Roehler on two other films: "Quellen des Lebens" ("Sources of Life", 2013) and "Tod den Hippies! Es lebe der Punk!" ("Punk Berlin 1982", 2015), in which he played smaller supporting roles. In 2016 he was part of the ensemble of the drama "Short Term Memory Loss" and the comedic metropolitan Berlin fairy tale "Mann im Spagat - Pace, Cowboy, Pace". In terms of his health, Zacher was already in bad shape at this point: in January 2016 he had to quit the television show "Ich bin ein Star - Holt mich hier raus!" (German version of "I'm a Celebrity – Get Me Out of Here") for health reasons after eight days. He was also no longer able to take part in Lars Kraume's TV drama "Der König von Berlin", which was filmed in summer 2016.