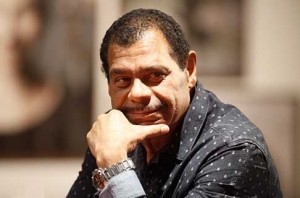 At the reopening of the Deutsches Filmmuseum in Frankfurt, August 13, 2011

The illegitimate son of a German woman and an American soldier, Kaufmann was born in Munich on 16 June 1947. After completing an apprenticeship and serving in the German Navy, he worked as a door-to-door-salesman. While working as an extra on the shooting of Volker Schlöndorff's "Baal," he met Rainer Werner Fassbinder, who had the lead in the film adaptation of Brecht's play. Fassbinder immediately took Kaufmann on as a member of his "factory," employing him as an actor and singer, e.g. in "Whity," a melodrama set in the American South. Their collaboration came to a preliminary end in 1971; it wasn't until 1978 that Fassbinder started giving him – mostly small – parts again. After Fassbinder's death, Kaufmann worked as an actor only sporadically, mostly for television.

The "Günther Kaufmann case" made headlines in the early years of the new century. Kaufmann was charged with murdering his tax consultant in 2001; the following year he was convicted of homicide in connection with extortionate robbery and sentenced to fifteen years in prison. In early 2003 it turned out that Kaufmann had not actually committed the crime, but had only confessed to protect his third wife, who had died in the meantime. He was released in November 2003 after two-and-a-half years in prison and acquitted of all charges in January 2005. His biography "Der weiße Neger vom Hasenbergl" (The White Negro from Hasenbergl) was published later the same year.

In the following years Kaufmann returned to acting and played several roles on stage, from 2007 on also in films, beginning with "Leroy". In Michael "Bully" Herbig's "Wickie und die starken Männer" ("Vicky the Viking", 2009) and the sequel "Wickie auf großer Fahrt" ("Vicky and the Treasure of the Gods", 2011), he played the villain "der schreckliche Sven". In Adnan G. Köse's "Kleine Morde" (Little Murders, 2012) he played his last role. Before the premiere of the film he died of a heart attack on May 10, 2012.