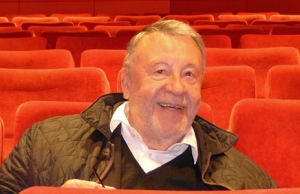 Günter Lamprecht in the Deutsches Filmmuseum, Frankfurt am Main, October, 2, 2013

Günter Lamprecht grew up in Berlin-Kreuzberg. After finishing elementary school, he started as a roofer's apprentice, worked at a button factory, and for three years as a trained orthopaedic technician. Lamprecht was also an amateur boxer who trained with famous boxer Bubi Scholz. In 1953, Lamprecht took acting lessons in Berlin and made his stage debut at Schillertheater in 1955. From 1955 to 1985, Lamprecht performed at theatres in Bochum, Oberhausen, Wiesbaden, Heidelberg, Essen, Cologne, Hamburg, at Berlin's Freie Volksbühne and at Recklinghausen Festival and Schwäbisch Hall Festival. Lamprecht also appeared in radio plays. From 1968 on, Lamprecht was regurlarly seen on TV in character roles such as alcoholic Manfred Burger in "Rückfälle" by Peter Beauvais.

He made his movie debut in 1975 in Ottokar Runze's "Das Messer im Rücken" ("Knife in the Back") and became known to a larger audience for his role as bankrupt baker Georg Baum in Erwin Keusch's "Das Brot des Bäckers" ("Baker's Bread"). Furthermore, Lamprecht worked for director Rainer Werner Fassbinder as Wetzel in "Die Ehe der Maria Braun" ("The Marriage of Maria Braun") and also as Franz Biberkopf in the multi-part TV movie "Berlin Alexanderplatz". Lamprecht also played the title role in "Milo Barus – der stärkste Mann der Welt", a film about the Viennese strongman Emil Bahrus.

In 1982, Lamprecht won the actor's prize "Chaplin-Schuh". His numerous parts include the role of captain of the "Weser" in Wolfgang Petersen's "Das Boot" ("The Boat") and the role of a Nazi captain in Jerzy Hoffman's "Zu Freiwild verdammt" ("After Your Decrees"). Lamprecht played debt collector Kosinksi in the TV series "Roncalli" who in the end stands in for the whiteface clown and starred as Berlin based inspector Franz Markowitz in the "Tatort" series. In 1997, Lamprecht was Eric Charell in "Comedian Harmonists" and starred alongside Mario Adorf and Bruno Ganz in "Epsteins Nacht" ("Epstein"s Night") as Reverend Groll who is unmasked as former SS member Giesser.

In 2007, he received both the Ehrenpreis des Hessischen Ministerpräsidenten for exceptional achievements in film and television and the Herbert-Strate-Preis for his contributions to German cinema. Also in 2007, Lamprecht was one of the leads in the multi-award winning short "Der Fährmann". Several years later, he starred in the short "Sein Kampf" (2013), playing a Holocaust survivor whose testimonial shatters the worldview of a 15-year-old neo-Nazi.

For the "Tatort" anniversary episode "Taxi nach Leipzig" (2016), the 1000th in the crime series, he once again took on the role of Berlin commissioner Markowitz in a guest role, which he had played from 1991 to 1995. In 2017 he played the role of President Paul von Hindenburg in the highly acclaimed and award-winning series "Babylon Berlin".

At the Hagen Short Film Festival Eat My Shorts, Günter Lamprecht was awarded the Honorary Actor Award 2018. In the following year, he appeared in a smaller supporting role for the TV drama "Meeresleuchten" (Director: Wolfgang Panzer, TV premiere: 2020).