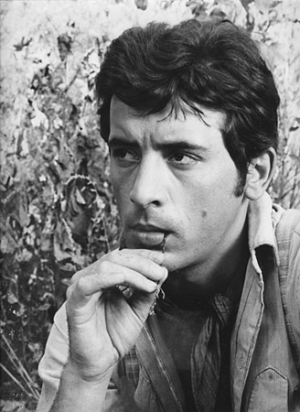 Harry Baer (née Harry Zöttl) was born in Biberach an der Riss on September 27 1947. In the late 1960s, Rudolf Waldemar Brem, a friend from school, introduced him to Rainer Werner Fassbinder. Baer joined the latter's "Antiteater" group and soon belonged to the inner core of Fassbinder's collaborators and friends. Together, they wrote the play "Werwolf" in 1969. The same year, Baer made his screen debut in Fassbinder's "Katzelmacher" (1969) and during the next years, he appeared in nearly all of Fassbinder's features, often also moonlighting as assistant director. His most memorable roles include the ex-convict in "Götter der Pest" ("Gods of the Plage", 1969), the soldier in "Pioniere in Ingolstadt" ("Pioneers in Ingolstadt", 1971, TV) and the mentally deranged son in "Whity" (1971). In Fassbinder's controversial "Wildwechsel" ("Wild Game", 1972), based on the play by Franz Xaver Kroetz, Baer played a 19-year-old worker who starts an affair with a 14-year-old girl (Eva Mattes) from a petty bourgeois family. For his performances in "Whity" and "Wildwechsel", he garnered nominations for the German Film Award.

Baer also occasionally worked with other directors, starring in the titular role in Hans-Jürgen Syberberg's "Ludwig - Requiem für einen jungfräulichen König" ("Ludwig - Requiem for a Virgin King", 1972) and being one of the leads in Uwe Brandner's "Im Zeichen der Kälte" (1973). During a temporary falling out with Fassbinder in the mid-1970s, he appeared in films by Ulli Lommel ("Adolf und Marlene" - "Adolf and Marlene", 1976), Hellmuth Costard ("Der kleine Godard", 1976) and Hans Jürgen Syberberg ("Hitler - Ein Film aus Deutschland" - "Hitler - A Film From Germany", 1977). He also starred opposite Jack Palance in the Italian-German co-production "Zwei Supertypen räumen auf" ("Rulers of the City", 1977).

After Baer and Fassbinder eventually reconciled, he worked as assistant director on "Eine Reise ins Licht – Despair" (1978) and production manager on "Die Ehe der Maria Braun" ("The Marriage of Maria Braun", 1978). Following his leading turn as a Red Army Faction terrorist in Fassbinder's dark political comedy "Die dritte Generation" ("The Third Generation", 1979), Baer collaborated on all subsequent releases of the director, be it as actor, assistant director or creative consultant. As one of Fassbinder's closest friends, he was the last to talk to the filmmaker in the night before his death on June 10 1982. In 1990, Baer published the biography "Schlafen kann ich, wenn ich tot bin. Das atemlose Leben des Rainer Werner Fassbinder", and in 1992, he was co-curator of an extensive Fassbinder retrospective in Berlin.

In subsequent years, Baer guest-starred in numerous TV productions and appeared in theatrical releases like "Max und Moritz Reloaded" (2005), "Montag kommen die Fenster" ("Windows on Monday", 2006), "Berlin am Meer" ("Berlin by the Sea", 2008) and "Zwischen heute und morgen" (2009). He also played supporting roles in the screen adaptation of the bestselling novel "Feuchtgebiete" ("Wetlands", 2013) and the comedy "Coming In" (2014). He also was the titular lead in the crime drama "Harder und die Göre" (2013), yet the film was not officially released in theatres. Most recently, Baer appeared in the TV production "Schwarzach 23 und die Jagd nach dem Mordsfinger" (2016) and the Mexican feature film "Bruma" (2017).

In addition to his acting career, Harry Baer served for 10 years as deputy editor of the website regie.de.