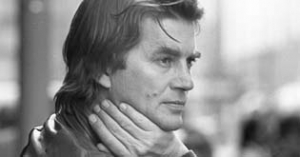 Roger Fritz was born in Mannheim on September 22nd 1936. In 1955, after an apprenticeship as a businessman, he made the acquaintance of photographer Herbert List in Munich and became his part-time assistant. He started to take pictures on his own, winning his first Photokina award as a 20year-old, followed by another prize two years later. In 1960, Fritz founded the now-legendary magazine twen, and in 1961, he enrolled at the Ufa talent school for acting and directing in Berlin.

Back in Germany, Roger Fritz directed feature films like "Mädchen, Mädchen" (1966), "Häschen in der Grube" (1968), "Mädchen mit Gewalt" (1969) and "Zwischen uns beiden" (1971). Moreover, he also performed as an actor in films by Rudolf Thome ("Fremde Stadt", 1972), Sam Peckinpah ("Steiner - Das Eiserne Kreuz", 1976) und Rainer Werner Fassbinder ("Lilli Marleen", 1981). In addition to this, he frequently worked as a set and still photographer on numerous productions, including several films by Rainer Werner Fassbinder. As a result, Fritz published a book on Fassbinder's "Querelle" in 1982.