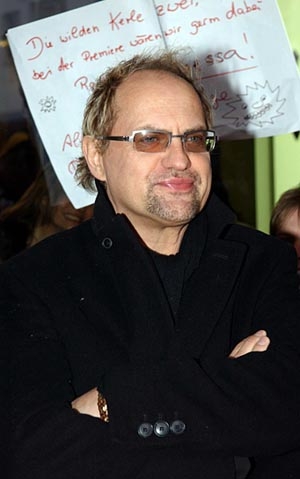 Uwe Ochsenknecht was born January 7, 1956, in the Hessian city of Biblis and grew up in Mannheim. He became attracted to acting already during his school days and was able to focus completely on acting after being expelled from school. From 1974 on, he attended drama school in Bochum and starred in some minor roles in several TV series. Ochsenknecht then became known to a wider public with his performance in "Das Boot" ("The Boat").

He then starred in "Der Rekord" ("The Record", 1984) und "Vergesst Mozart" ("Forget Mozart", 1984) but suddenly became a newcomer star with his part in Doris Dörrie's comedy "Männer" ("Men", 1985): Ochsenknecht won the German Actors award as best young actor. In Helmut Dietl's contemporary satire "Schtonk!", Ochsenknecht made a dashing performance as the clever forger of the Hitler diaries.

In 2006, Ochsenknecht appeared in Oskar Roehler's film adaptation of Michel Houellebecq's "Elementarteilchen" ("Elementary Particles"). He also starred in the movie "Die wilden Kerle 3" ("The Wild Soccer Bunch 3") and in the satire "Tollpension", a TV production.

In the years that followed, he appeared in a large number of television productions. In Franziska Buch's award-winning comedy "Angsthasen" he played an unusual psychotherapist, in Urs Egger's black-humoured relationship satire "Böses Erwachen" (2009) as a disloyal husband and in Dieter Wedel's highly acclaimed two-parter "Gier" ("Greed") as a financial investor

In "Kleine Morde" ("Little Murders", 2012), Ochsenknecht and his son Jimi Blue stood in front of the camera once again as father and son: Adnan Köse's science fiction drama is set in a near future in which the age of criminal responsibility is abolished. In a first demonstration of the new regulation, the 12-year-old son of a judge is put on trial for an alleged murder. In "Ludwig II." (2012) by Marie Noelle and Peter Sehr, he takes on the roll of Prince Luitpold.

On the big screen, Ochsenknecht had a challenging role as the severely disabled father of a teenager in the award-winning tragicomedy "Nena" (NL/DE 2014). Otherwise, his appearances have been mostly limited to smaller yet striking supporting roles. In the children's book adaptation "Das kleine Gespenst" ("The Little Ghost", 2013) he played the double role of a mayor and the general Torsten Torstenson; in the comedy "StadtLandLiebe" (2016) he made life difficult for two townspeople as a grumpy villager; and in the successful social comedy "Willkommen bei den Hartmanns" ("Welcome to Germany", 2016) he portrayed a plastic surgeon.

In 2017 Ochsenknecht had two leading roles on the big screen: In Sabine Derflinger's controversial sexism comedy "Anna Fucking Molnar" (A), he is the father of the title character; and in the children's film "Burg Schreckenstein II - Küssen (nicht) verboten" ("Shiverstone Castle 2"), he played the unfortunate cousin of the lord of the castle. In March 2018 the children's film "Jim Knopf und Lukas der Lokomotivführer" ("Jim Button and Luke the Engine Driver") followed, with Ochsenknecht as King Alfred the Quarter-to-Twelfth.