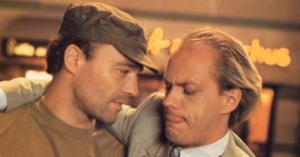 Julius Armbrust has everything he could wish for: money, success, his family, his affairs; until one day, on his 12th wedding anniversary, he finds out that his wife Paula has a lover: Stefan, a man of his own age, an out-of-work graphic artist – a hippie in Julius’ eyes. Julius’ world falls apart. He pretends to go away, but in fact remains in town and does not let Paula and Stefan out of his sight. Stefan throws his old girlfriend out of the flat. Julius applies for the vacant room, and Stefan, unsuspecting as he is, agrees to share his flat with him. Julius is determined to get to know Stefan, in order to discover the latter’s weak points. When Stefan admits to him in his drunken stupor that perhaps he would not have anything against money and career after all, Julius knows what he has to do. His only problem is that he starts to really like Stefan. Julius achieves his goal; Stefan becomes what Julius himself is. Paula loses interest in Stefan, who is suddenly so strangely like her own husband, and Julius returns home.