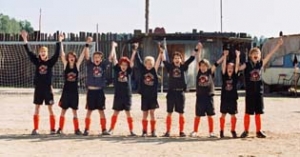 Yeeeees! Great dribbling from Leon, there, right across the pitch! He’s going to shoot! But no! He’s sold the defender the dummy! But what’s this? It’s little Raban coming down the left wing! He’s taken the ball! He’s heading for the goal! He shoots and … GOAL! GOAL! That’s it! And THEEEEERE’S the final whistle!” Clear the pitch! Lock up the referee!

The most daring team of junior soccer players to take to the hallowed green turf, The Wild Soccer Bunch, is back! This time they not only have to defend the trophy of trophies, the Teufelstopf, and their command of the town against the dreaded skater gang, the Flammenmuetzen, but also - shock, horror, gasp - fight for Vanessa (a girl of all things!) who’s fallen in love with their leader! The motto still applies: ‘If you want to be cool, you got to be wild’.