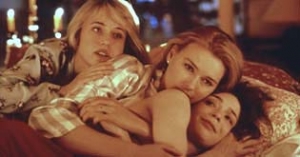 Christine is studying psychology. Linda is working in an advertising agency. They are living together and actually get on quite well - it′s only men where they have never come eye to eye! While Christine has spent years mourning a past love affair, Linda has specialised in collecting men and proposals of marriage.

Her greatest fun is in turning down the proposals she gets. Linda has the men under control. She takes what gives pleasure and doesn′t let herself get hurt. It′s no surprise that they keep on squabbling ... Linda tries to convert Christine. And Christine accuses Linda of cynicism. She holds up the example of the seven-year old marriage between Manuel and Barbara. But Linda can′t help laughing. Christine has no sooner brought up Barbara than she is on the phone: crying, shattered. She has caught her husband in flagranti with his secretary. Barbara is going wild. Her dream of a cosy happiness together has burst like a bubble. Barbara flees to Christine and Linda. Mad with Manuel, she is fascinated by Linda and the way she deals with men ...