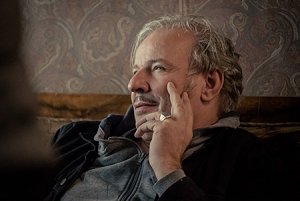 After several minor appearances in movies by Detlev Buck and Christoph Schlingensief, among others, Haußmann made his debut as a movie director in 1999: His adaptation of Thomas Brussig's novel "Sonnenallee" about the life of teenagers in the GDR became a big success with critics and moviegoers alike. Furthermore, the film won the German film award in silver. Haußmann's second movie, the sarcastic Kreuzberg comedy "Herr Lehmann" (2002), also won two German film awards (for supporting actor and screen play). His third film, the satirical comedy "NVA" (2005) about the last months of the GDR's Volksarmee (National People's Army) was less successful with critics and moviegoers than his first two films. In 2007, Haußmann finished his fourth film as a director, "Warum Männer nicht zuhören und Frauen schlecht einparken können" a comedy about new and old stereotypes in the battle of the sexes.

One year later, Haußmann finished "Robert Zimmermann wundert sich über die Liebe" ("Robert Zimmermann Is Tangled Up In Love"). The comedy, based on the novel by Gernot Gricksch, won the 2008 Bavarian Film Award in the category "Best screen play" and received well-meaning reviews but did turn out as a success at the box office. Haußmann ranks among the most productive German film directors due to his high and quick output of films. His next film was the satirical comedy "Dinosaurier – Gegen uns seht ihr alt aus!" (2009), a tribute to Bernhard Sinkel's classic film "Lina Braake" from 1975.

In 2011 "Hotel Lux" had its theatrical release. The comedy starring well-known German actors Michael Herbig and Jürgen Vogel tells the story of a comedian who in 1938 flees from the Nazis and becomes involved in an intrigue of the Russian KGB in a hotel for expatriates in Moscow.

The film won the producer's award at the Bavarian Film Awards and garnered Haußmann the Golden Butterfly Award at the Rome Film Festival. Together with Sven Regener, Haußmann wrote and directed the satirical farce "Hai-Alarm am Müggelsee" (2013), in which the prospect of a dangerous shark in local waters alarms a small German town. The same year, the Haußmann-directed "Polizeiruf 110" episode "Kinderparadies", starring Matthias Brandt as police detective, was aired and received great reviews.

In 2017, Haußmann returned to the big screen with an adaptation of Jan Weiler’s bestselling novel "Das Pubertier". At the end of 2018, his play "Staatssicherheitstheater" premiered at the Berlin Volksbühne. The following year, he staged Heinrich von Kleist's "Amphitryon" at the Thalia Theater in Hamburg.

Also in 2019, Haußmann began shooting his next feature film: "Stasikomödie" ("A Stasi Comedy") is about a Stasi informant who is supposed to infiltrate the Prenzlauer Berg art scene but soon takes a liking to his new surroundings. The film was not released until May 2022 due to the COVID-19 pandemic.