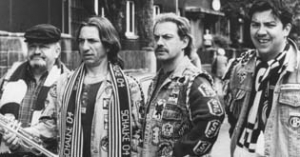 Soccer is their world and Dios is their God.
Hans Polak and his friends are fiercely dedicated fans of the soccer club Schalke 04 and Hans is the king of them all. He would give up everything for soccer and is already well on his way doing so.

He lost his job six months ago and, in drunken frenzy, puts his wife′s house up as security for a bet that Pablo "Dios" Diosprese, his fovorite player, will make a goal in the last game of the season. Dios, burned out and out of shape, is sick and tired of Schalke and is planning on changing to FC Internazionale Milano the next season. Drunk again, Hans kidnaps Dios to make him get back into shape for the game. It is not until his wife and son move out and his mother dies that Hans finally gives up and lets Dios go. But Dios′ life has fallen apart while he was being held hostage: another player has his InterMilan contract and his wife has run away with his manager. Determined to prove that he still has "the touch", Dios plays the game and saves the day.