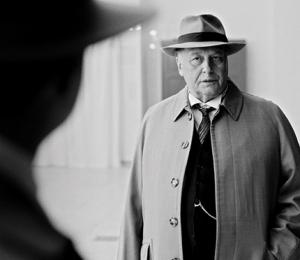 Thomas Thieme was born in Weimar on October 29, 1948. He studied acting at the Staatliche Schauspielschule in East Berlin (later known as the Hochschule für Schauspielkunst "Ernst Busch"), and from the mid-1970s on, he performed at the Theater Magdeburg and the Theater Halle. During that time, he also had his first appearances in film and TV productions.

In 1984, Thieme – who three years previously had filed an application to emigrate from East Germany — was eventually allowed to leave the GDR. Settling in West Germany, he was hired by the Schauspiel Frankfurt, where he performed from 1984 until 1990. During the 1990s, he worked at the Burgtheater in Vienna, the Schaubühne in Berlin and the Deutsches Schauspielhaus in Hamburg, where his performance as Richard III in the production of "Schlachten!" (2000) was singled out by the trade paper "Theater heute" which named Thieme actor of the year.

From the mid-1990s on, Thieme regularly appeared in TV productions as well. In addition to guest-starring stints on TV shows, he had roles in the made-for-TV films "Das Phantom - Die Jagd nach Dagobert" (1994) and the miniseries "Warten ist der Tod" (1999).

Yet, Thieme also remained a fixture in theatre, both as stage actor and director. He starred in the production of "Faust I" at the Deutsches Nationaltheater in Weimar, where he directed Brecht's "Baal" (2003) and "Margaretha.Eddy.Dirty Rich" (2005). Moreover, he played Willy Loman in "Death of a Salesman" (2006) and starred in "Moliere. Eine Passion" 82007), both produced at the Schaubühne in Berlin.

At the end of the 2000s, Thieme shifted his focus to film and television. After his turn as a judge in the controversial political drama "Der Baader Meinhof Komplex" (2008) and as the father of Effi in Hermine Huntgeburth's "Effi Briest" (2009), he starred in four 2009 theatrical releases: The comedy "Männersache", the historical drama "Berlin 36", the mystery thriller "Die Tür" ("The Door") and the romance "Liebe Mauer" ("Beloved Berlin Wall").

On TV, he was one of the leads in the miniseries "Krupp - Eine deutsche Familie" (2009, TV) and played German chancellor Helmut Kohl in the biopic "Der Mann aus der Pfalz" (2009, TV).

Following a stint on the stage of the Schauspielhaus Hamburg for a production of Kleist's "Robert Guiskard, Herzog der Normänner", Thieme appeared in Andres Veiel's drama "Wer wenn nicht wir" ("If Not Us, Who", 2011) and in Leander Haußmann's historical comedy "Hotel Lux" (2011). He next played German field marshal Günther von Kluge in the WWII drama "Rommel" (2012, TV) and actor Paul Wegener in the biopic "George" (2013, TV). His performance in the TV thriller "Das letzte Wort" (2013, TV) won him a Hessian Television Award.

He went on to star as a tough police captain in "Wir waren Könige" ("The Kings Surrender", 2014), the evil Holländer-Michel in the fairy tale adaptation "Das kalte Herz" (2014) and as a retired cop in the made-for-TV thriller "Besondere Schwere der Schuld" (2014, TV).

After leading roles in the political satires "Die Eisläuferin" (2015) and "Er ist wieder da" (2015), Thieme played a police detective in Gordian Maugg's expressionist biopic "Fritz Lang" (2016). Alongside Henry Hübchen, Michael Gwisdek, Jürgen Prochnow and Winfried Glatzeder, he next starred in the 2017 spy comedy "Kundschafter des Friedens". In the same year he belonged to the ensemble of the GDR comedy "Willkommen bei den Honeckers".

Thieme played a leading role in Volker Schlöndorff's TV crime drama "Der namenlose Tag" (2017), as a retired detective who is caught up in an unsolved case. Director Marcus O. Rosenmüller cast him in his historical TV movie "Die Affäre Borgward" (2018) in the title role of automobile entrepreneur Carl F. W. Borgward. Thieme had an important role as Berlin Police Commissioner Karl Zörgiebel in "Babylon Berlin" (2017-2020). In Michael Krummenacher's award-winning three-parter "Preis der Freiheit" ("The Wall", 2019), about three sisters in the GDR between 1987 and 1990, he played the SED politician Alexander Schalck-Golodkowski in a smaller supporting role.

Lighter fare was the children's film "Max und die Wilde 7" ("Max & the Wild Bunch", 2020): Thieme played a leading role as the fit inhabitant of a senior citizens' home who, together with a small boy and two other pensioners (Uschi Glas, Günther Maria Halmer), goes on the hunt for a mysterious thief.